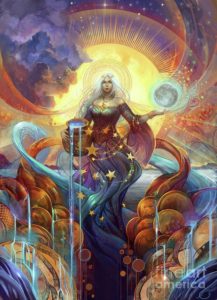 The sign that the Sun travels through casts a light of that sign’s influence across the land, and we are all affected by it no matter what our individual chart looks like. The Sun enters Aquarius at 3:39 pm Eastern time today, at which point there will be four three in Aquarius: Saturn, Jupiter, Mercury and the Sun.  This takes us fully into Aquarius season, and into the Aquarian experience of detachment, reason, community, collegiality – a nice change from what we’ve had under the Capricornian influence of 2020 which is pretty much every man for himself.

There is a lot of fiery energy right now, however – the Moon (feelings) has moved into Aries (fire and individual need) and energies are building for tomorrow’s (January 20) conjunction from Mars to Uranus which is already stirring up rebellion and radical departures from established ways of doing things.  It may be difficult to sleep over the next couple of days under that excitable influence in which the aggression of Mars combines with the resistance of Uranus to the status quo, but on the other hand, this influence helps us to more easily embrace the new and release the old.  And all of this occurs under the Aquarian umbrella of fairness, reason and equality which can hopefully take us in a positive direction. ❤️