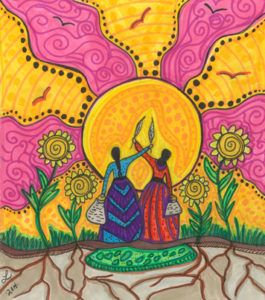 Planetary cycles don’t cause problems where problems don’t exist, but certain planetary cycles can reveal any fractures in our personal relationships which may cause more problems in the future.  Today we have some of this with the Cancer Moon opposite Venus and Pluto in the middle of the day.  When the Moon is in Cancer we are a little more vulnerable, as Cancer teaches the very nature of feeling and opens the door to the heart.

An opposition from the Moon to Venus itself is usually barely even noticed as it is so gentle, but because the pressures are building for Venus to conjoin Pluto on the 28th, the Moon acts as a translator to begin those energies early.  A conjunction from Venus to Pluto is associated with intensification which can be great for romantic passion, but less great where power conflicts are concerned.  It’s a good day to find the balance point between ourselves and others, and see where diplomacy can rule the day.