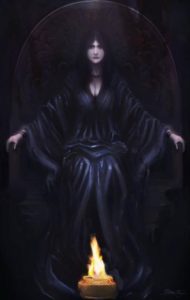 As the brilliance of the Leo Full Moon begins to fade, we have an exact conjunction of the Black Moon Lilith to Eris.  The Black Moon Lilith, a theoretical point which relates to the Moon, is connected to themes of feminine rage reflecting the story of Lilith, Adam’s first wife, who refusing to submit to her husband was sent to the wilderness without her children and spent the past few thousand years wailing in frustration and anger.  The oppression of women under a patriarchal system has become a stronger story since the archetype of the Black Moon Lilith has emerged.

Eris was the goddess of discord who threw the golden apple which asked the question “Who is the Fairest” after being skipped over when invitations to a wedding party were handed out, a seemingly small act which began the Trojan War, a conflict which lasted for ten years.  The combination of these two dark goddesses lasts only a day or two, but themes of emergence from oppression into power and authority is one of the more positive themes of this alliance.  It is a good day to see where we may be letting our inner strength seep away through resentments and anger which serve no real purpose.