10 reasons not to worry about the July 11 eclipse

10 reasons not to worry about the July 11 eclipse 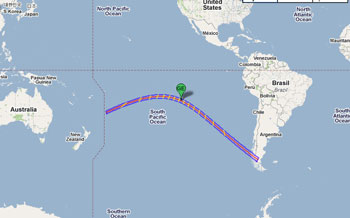 Path of the July 11 eclipse

Bad news sells, and this is true for astrology websites as well as any other news media.  Eclipses are not so mysterious today, but “astrologic dangers [are] portended” on many sites, including this one:

As per Vedic Astrology, the Sun, Moon, and Ketu are together in Gemini and Rahu opposite them. Mercury is in Cancer, Mars and Venus together in Leo, and Saturn in Vigo casting his glance at Sun, Moon and Ketu. This is not a good situation and could cause dangers all around. The Earth will shake due to strong electromagnetic forces and will cause a lot of disruption on Earth.

Countries and places around water would get most affected. Islands, peninsulas, and gulfs would be most susceptible to major dangers. There could be floods, storms, Tsunamis, and many accidents. I also see areas of green getting affected. Flora, fauna, valleys and lakes could be affected. All these need not happen just on July 11th, but does create energies for these things to come soon.

It does tend to be mostly the Vedic astrologers who are more bold in their predictions of both doom and glory, but I get plenty of emails from clients who want to know what kind of earth-shattering effects to expect.

So here are ten reasons not to worry about Sunday’s eclipse: