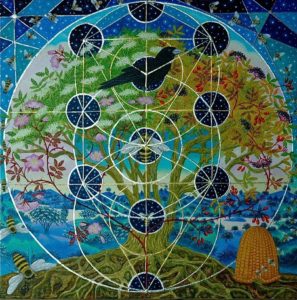 When two planets are about to meet but haven’t yet connected and a faster moving planet (or luminary) connects them, we say this faster moving planet has “translated” the planetary cycle of the other two.  This is exactly what we have today as the Capricorn Moon squares Mars this morning (Eastern time) and a few hours later conjoins Pluto, setting us up for the challenging square from Mars to Pluto on December 23rd.  Under the Capricorn Moon we are serious and eager to work at whatever situation presents itself, but the square from the Moon to Mars today can inspire some irritability and stimulate any lurking anger or frustration.  A few hours later the Moon conjoins Pluto and intensifies these reactions to a greater degree, resulting potentially in the exposure of conflicts that will become more apparent as we get closer to the exact Mars/Pluto square.

Saturn is at the critical or anaretic degree (29) of Capricorn right now, a degree which I call the “make it or break it” phase of a planetary cycle through a sign.  There may be a last minute adjustment required before Saturn moves into Aquarius tomorrow (December 17th) and begins the opening of the door to the new Aquarian energy which lifts us from the mundane world of Earth into a period of perspective and rational thought in Air. ❤️