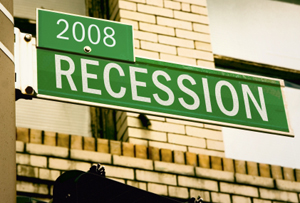 I found this article in my drafts folder – for some reason I never published it.  I found it interesting and perhaps you will too.

We predicted the coming of the recession, can we also predict when it will be behind us?

I began predicting a decline in the financial markets when Jupiter (expansion) made a square to Saturn (restriction and the imposition of limitations) back in late 2005 and 2006.  At that time I, like other astrologers, began recommending that people get out of the stock market, assuming that Saturn would begin to set limits on the ever-expanding market prices.  Still, the stock market remained relatively strong and continued to expand with Jupiter in Scorpio, the sign of investment and other people’s money.  In January 2007 I admitted that I had been wrong:

I feel that the stock market remained strong because of the determined optimism of Jupiter’s passage through Scorpio, which rules other people’s money and therefore the stock market, as well as the continued travel of Pluto through Sagittarius and its irrational exuberance. The astrological indicators are relatively benign for 2007. Except for the ongoing opposition of Saturn and Neptune which could disappoint (Saturn) some deluded (Neptune) investors who wear rose colored glasses and the square between Jupiter (expansion) and Uranus (sudden change) which may bring about sudden changes of fortune for all kinds of people, I don’t see anything that will bring about a recession.

However, it’s clear now that the seeds were sown during 2006 for the slowdown of the economy that hit us in 2008.  Home prices peaked that year, as did the frenzy of subprime mortgages.  However, the strength of the “irrational exuberance” as I called it of Pluto’s travel through Sagittarius made it difficult to see anything but continued growth and expansion.

When Saturn entered Virgo in the early fall of 2007 we saw the beginning of the reality check and a more practical approach to finance as major banks began to collapse in France, England and the US.  Still, it wasn’t until Pluto entered Capricorn and the Sagittarian party was over that the economy began to collapse.  No longer propped up by the Sagittarian exuberance, the chinks in the structure (Capricorn) began to become obvious and the house of cards began to fall.

So what do we see in the future?  I don’t want to be the bearer of bad news, but we have a ways to go before the picture becomes rosy.  I do want to emphasize, though, that this economic downturn can provide an opportunity for all of us to see what really has meaning in our lives, and to make the changes that we need in order to strengthen the foundation of that which is important to us.  That is what Pluto in Capricorn is calling for here.

Next year, in 2010, Saturn in Libra will form a challenging square to Pluto in Capricorn beginning in February.  At the same time, the conjunction between Chiron (wounding and healing) and Neptune (dissolving our dependence on material reality) will be complete. This is when I believe the recession will be at its worst.  By summer of 2010, Saturn will have moved out of the square to Pluto, and Jupiter’s expansion and optimism will conjunct the radical new ideas of Uranus, which will help to rebuild and transform the existing and outmoded structures into something more streamlined for the New Economy.

Pluto’s travel through Capricorn will completely transform the way we look at money and finance, and Uranus will be forcing a change.  The conjunction of Jupiter and Uranus will be set off by a square to Pluto, and at this time it will be very clear that the old ways will not work in the Brave New World.  I believe that we will begin to see small banks starting up all over the world as the bigger and more cumbersome financial models collapse.

At the same time, however, there will be an increased struggle between classes since it is the very poor who under this recession may lose more and more, while the rich and middle classes sustain a greater degree of wealth.  It will be important during this time to unite as a global community in order to prevent class warfare as Uranus enters Aries and begins to sow the seeds of revolution against the established order as represented by a square to Capricorn.

This is not a time to despair, because all cycles are temporary.  What is needed now is a clear and practical plan to survive difficult times, combined with the understanding that despair will only create more of the same.  With less work and less available funds, we can spend more time at home with our loved ones and with the things in our life that are most important.