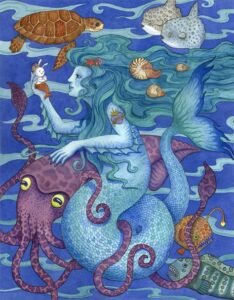 Mercury has just moved out of intellectual Aquarius and into Pisces, the sign of the dreamer.  Although traditional astrologers will say that Mercury is in its detriment in Pisces because its ability to think rationally is affected by Pisces’ watery nature which tends to act like a psychic sponge and the boundaries between reality and the mystic are often blurred, for spiritual matters and the expansion of the imagination Mercury is at its best in Pisces where it is unaffected by personal ego and rigid belief systems.

The use, or non-use, of words and language for the purposes of magic and imagination is what Mercury in Pisces is all about. With Mercury in Pisces the inner landscape becomes rich and colorful, a gorgeous tapestry of thoughts, ideas and dreams. Mercury is one of four planets in Pisces, so until the Sun and Venus move into Aries later this week the Piscean magic is strong.  We may not be as organized or focused right now, but the creative potential is endless!