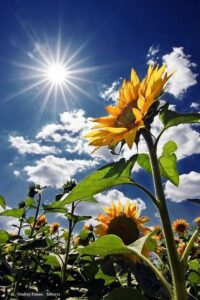 Jupiter is known as the Greater Benefic because its positive influence is thought to bestow good luck and prosperity. Its light shines bright in the sky, and the confidence and optimism it bestows helps us to embrace a broader view that allows for increased abundance and positive energy.  Today Jupiter smiles on the Sun (sextile aspect) which is in Aries, expanding and directing the innocent and pure energies of Aries and helping us to gain a clear vision of what lies ahead.  There is one dark cloud though – a building square from the Aries Sun to Pluto which culminates early on April 16th. This can add a layer or two of intensity so it’s very important to try to channel the fiery energy at work right now (Aries) into something productive like physical activity or something that challenges us.

Fortunately, Jupiter and Mars are moving into a trine position – they are already very close to exact which will culminate in the wee hours (EDT) or early morning (GMT) on April 16th.  This is another very positive and happy planetary dance which will continue the good vibe for a few days.  Meanwhile the Moon is newly in Gemini which puts more focus on the mental realm and adds some urgency to the need to communicate and properly share information in order to bring about the best of Jupiter’s good fortune.