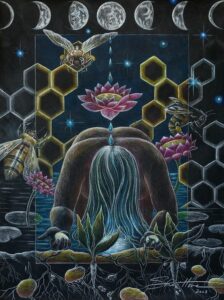 Mars is in Cancer every two years or s0, and because Mars is the planet of aggression and drive it is not very comfortable in the emotional sign of Cancer.  When anger and emotional sensitivity combine there can be one of two results:  at its best, we are more sensitive and nurturing of others (Cancer) in taking our own needs into consideration (Mars).  But Mars is by its very nature a self-centered planet and this rarely occurs, so more often we become angry (Mars) at the need to watch out for the feelings of others (Cancer).  While Mars is in Cancer, emotions are heightened and there is much more sensitivity evident in the world around us. Mars is said to be in its fall in Cancer and has difficulty expressing its warlike nature directly. Often anger and irritations tend to be suppressed and burst out inappropriately or with frustration.

Mars in Cancer also increases our drive to nurture, often through food, and to protect those less fortunate than ourselves, so we are likely to see a big push toward philanthropy over the next few months and perhaps an increased desire to feed the hungry. Sometimes our own frustration can masquerade as our frustration with the fates of others around us, and as with all water signs it can be somewhat difficult to know whose emotions are whose under this influence. Cancer’s main concern is with emotional security, and Mars in Cancer wants to erect solid boundaries with which to secure the heart.  Mars will be in Cancer until June 11, 2021.