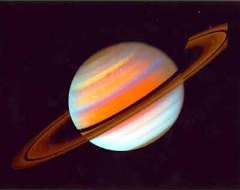 Saturn, you may remember, is the planet that surrounds itself with rings.  This is an apt metaphor for the restrictive quality that Saturn represents and which is the predominant influence right now.  We have Pluto having just entered the sign of Capricorn, which is ruled by Saturn and shares its love of restriction, limitation, hard work, social mores, governmental structures.  And now we have Saturn preparing to turn retrograde.

Planets obviously don’t ever move backwards, but astrology is not astronomically correct.  Yes, scientists – it’s true, because astrologers view the motion of the planets from our perspective on earth.  Most of the planets from time to time appear to travel in reverse motion, and we call that “retrograde.”  When a planet is preparing to change direction, either in reverse or direct (forward) motion, its motion slows down to a crawl.  The planet is then said to be “stationary,” or “making a station.”  This is very like the motion of a car that is making a U-turn – as it turns it remains in the same location and stays there until it has built up sufficient speed to begin traveling again.

When a planet is retrograde, its influence is accentuated and there is a tendency for the processes of life that are governed by that planet to become stalled.  This forces us to pay more attention to those processes and perfect them in a way we would not be motivated to do otherwise,  The most famous retrograde is Mercury, and even people who know nothing about astrology are familiar with “Mercury Retrograde” periods in which communication gets difficult and machinery often stops operating.  But all planets have retrograde periods, so we have the opportunity to get to know them all more intimately during those retrograde periods.

Right now we are dealing with Saturn which turned retrograde on December 31st at 21 degrees Virgo.  Saturn will be retrograde until mid-May, during which time the intense focus that Pluto has brought to bear on Saturnine/Capricornian matters will become even sharper.  Frederick Woodruff has some interesting things to say about Saturn:

If the Saturnian impulse to create and give substance isn’t utilized — by first welcoming the type of depression that facilitates the process — that same force will turn against us and become tyrannical. Saturn gone wrong places us under the dominion of what Freud defined as our superego. The superego is a function of the psyche comprised of the internalized voices of our parents. Critical admonishments that attempt to control by belittling and bringing attention to our shortcomings. The harsh world of our inner critic. Once the superego is activated it’s very hard to accomplish anything in life. We’re infantilized, cut off from the power of our adulthood. We tend to freeze and venture nothing, leaving us stalled and floundering in the depressive state.

I like to think that with Saturn conjunct my Sun in my birthchart I have grown intimately familiar with Saturn and he does have a lovely side.  In fact, I wrote an article about this a while ago called Saturn: Both Beast & Prince which I will probably repost tomorrow.  If we know what Saturn wants when he’s operating as the Celestial Taskmaster, either in our natal chart or by transit, we are much more likely to gain the material rewards of success that comes from Saturnian qualities of discipline and hard work.