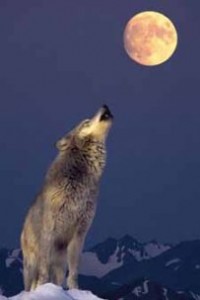 The first Full Moon of the year is known as the Wolf Moon, because in January hungry packs of wolves surrounded Native American villages.

The Full Moon on January 10th is in Cancer, with the Moon opposite the Capricorn Sun. Home and family life is emphasized now under the sign of Cancer, and Saturn (stability and structure) forms a harmonious aspect to the lunar event with a trine to the Sun and sextile to the Moon. Uranus (innovation and that which is new) is involved as well, with a trine to the Moon and a sextile to the Sun.

These four form a configuration known as a Mystic Rectangle (two oppositions and two sextiles). The Mystic Rectangle can be a very positive aspect signifying balance and harmony – there is enough tension from the planets that oppose each other to energize the aspect, yet the sextiles offer a harmonious route to resolution. My friend Malvin Artley notes that there is also a Yod in this Full Moon which I hadn’t noticed.  Caution: Geeky astrological details ahead.  The Yod is another unusual configuration which consists of a sextile (in this case, the Moon sextile to Saturn) where both ends are 150 degrees (quincunx) another point (in this case Neptune). Malvin writes, “Yods bring change and fated occurrences. The basic energy of this yod is one of possible melancholy, the dissolving of inherited or assigned positions, feelings of inferiority and a general feeling of instability – further contributing to a generalized sense of discontent with life or affairs in the world.”

This Full Moon, in the sign which it rules and is therefore most happy in, can a lovely time to honor our responsibilities to our clan or our tribe, to create and enjoy a nurturing space within our home. Full Moons can be periods of emotional fullness, and this Full Moon will be a beautiful time to open our hearts.

Full Moons can also be times when raw emotion is fully exposed, and at no time is this more true than when the Full Moon is in Cancer, the Moon’s sign.  Cancer is extremely sensitive and can be touchy (hence the term “crabby,” from the sign of the crab).  There is also a particular sensitivity to the woes of the world under this sign.

As Mars moves away from its conjunction to Pluto earlier this month, Pluto now stands alone – unaspected and solitary.  Pluto will not form an aspect to any other planet until it begins to square the Moon on January 23rd.  When Pluto is unaspected, the underworld of the psyche and the powerful instinctual response which is Pluto’s domain can operate without hindrance. This can be a beautiful time of power, if that instinct is focused with clear and conscious intention.  It can also be a time when the dark subconscious Shadow forces rise and take over the conscious mind.

This is of particular significance during the Full Moon, when the instincts are raw and potent anyway. The Mystic Rectangle provides a balance that can aid in integration, but Pluto is a power player at the moment.  Pluto begins to square Venus around the 29th and will then begin operating in tandem with other planets again.

Meanwhile, Mercury turns retrograde on January 11th where it will remain through January 31. Mercury Rx periods are famous for communication glitches and machinery failures. Often these are due to user error, as our brains function diffierently during the three weeks, four times a year, when Mercury is retrograde. If you must enter into a contract or begin a new job or project during this period, do everything you can ensure that all agreements are clear and in writing. Read all of your instruction manuals, and don’t be surprised if your phone messages don’t reach their intended destination. Just shrug your shoulders and laugh: “Mercury is retrograde!!” The Sun forms a trine to Saturn on that day which should offset some of the challenges with a nice clear focus.