The astrology of Mubarak’s resignation

The astrology of Mubarak’s resignation

Tem Tarriktar of The Mountain Astrologer posted a chart of the resignation on Facebook yesterday which you can read here with all of the associated comments.  A link to the actual announcement on Egyptian TV was posted which includes a time stamp of 6:02 pm Cairo time so that is the chart that I have used.  Another commenter reports that Al Jazeera’s live blog of the events in Egypt reveals that Mubarak actually turned over the reins to the vice-president Thursday night, but I am using the formal announcement to the public as the time for this chart. 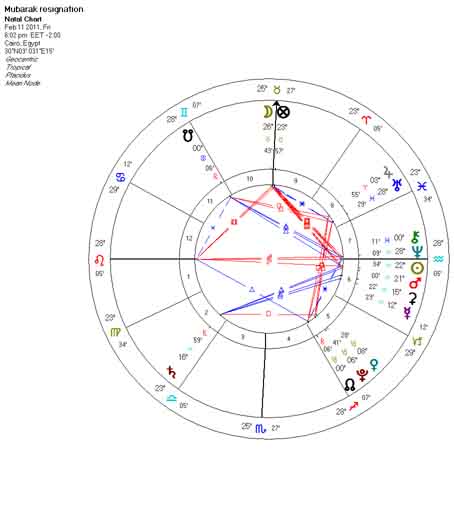 Any event is a snapshot of a moment in time, and the astrological chart for that moment sets the tone for how that event will unfold.  This is called “mundane” astrology.  There are some extremely interesting things about this chart.  First of all, the Moon is angular at the Midheaven, suggesting that the people (represented by the Moon) have taken over the government.  There is a lot of talk right now about this being a military coup, and we see this represented by a tight conjunction of the Sun (the leadership of the country) to Mars (the military).

Neptune is angular on the descendant, the cusp of the seventh house.  Since Neptune is associated with mass hysteria and deception as well as ideals and the descendant involves relations with other nations, but also alliances that are forged within the country itself.  In this fever for revolution, no one really knows who their allies are and we are likely to see this become a big issue in the weeks to come.

This difficulty in creating strong alliances (Neptune) that will support the people (the Moon) is reflected in the challenging square from Neptune to the Moon in the chart, and both planets are angular so they are particularly powerful.  The fever of revolution has occurred, but then the question “who is  in charge” will not be easily answered.  We see this theme repeated in the conjunction of Venus to Pluto which does not bode well for existing alliances and suggests a great deal of mistrust, both internally within Egypt and looking to traditional allies of the country.

Mubarak had stated repeatedly that he would not resign, but his resignation occurred while transiting Mars (action) opposed Pluto (endings and transformation) in the Egypt chart, stirring up a wave of resentment and rage that could not be denied, as Mars/Pluto contacts often do.  We also see transiting Saturn enforcing the law in a square to the progressed Midheaven (government) in the Egypt chart, reminding Mubarak that the handwriting was on the wall and there was no more room for illusion.

Update: Jamie Funk added these comments which are extremely useful to the conversation:

Moon and MC both on fixed star Algol, the leader lost his head, symbolically. You also mentioned to importance of Sun conjunct Mars and the military involvement. This conjunction was opposite Pluto in the chart for Egypt as you mentioned, and there was more Mars involvement in the chart. Jupiter was square the Egypt Mars, and the AntiVertex in the resignation chart was conjunct the Egypt Mars. I think the country still has a difficult road ahead, Uranus will be square that Mars through this year.

Then I asked Jamie to comment on the fact that Regulus is rising in the resignation chart. Regulus rising. This star is a military star, Mars-Jupiter in nature. It’s fast acting, bold, courageous and associated with military men and coups. The Full Moon next week is on Regulus, and we had the New Moon last week on Mars. The fixed stars really do shine in charts of rulers and nations. That what astrologer wrote for, the interpretation work so well in this area. Egypt is an ancient nation, and Mubarak was a Pharaoh.