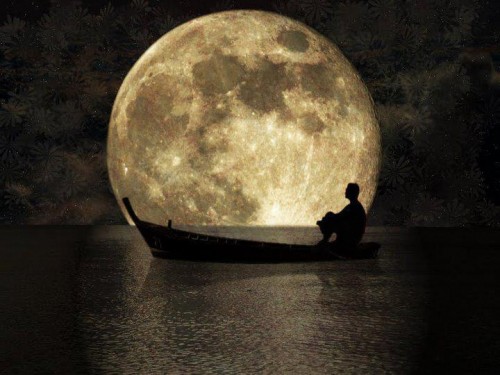 by Lynn Hayes  If you missed yesterday’s post on the Full Moon you can read it here. The May Full Moon occurs as the Moon is at what’s called perigee, its closest proximity to Earth.  When the Moon is near the Earth it appears larger than life, and astrologer Richard Nolle coined the term “Supermoon” because of the powerful impact the Supermoon often has on the earth.  As Richard explains it (and has done since 1979), the Supermoon occurs when the Sun, Moon and Earth are lined up in a particularly tight formation.  Richard has noted correspondences between the Supermoons (which occur at least four times a year) and earthquakes and tidal forces.

Examples of the SuperMoon connection with major storms and seismic events abound: the Mt. Pinatubo eruption, the largest volcanic event in the second half of the 20th Century, took place on June 15, 1991 (within three days of a SuperMoon); the October 6, 1948 Richter 7.3 earthquake that struck Ashgabat, Turkmenistan and took 110,000 lives, one of the deadliest earthquakes on record (again within three days of a SuperMoon, allowing for time zones); and the September 8, 1900 hurricane and tidal surge that struck Galveston, Texas on the day of a SuperMoon, which killed more people (8,000 dead) than any other Atlantic hurricane on record and remains the deadliest natural disaster yet to strike the United States. I’m just scratching the surface here, citing only a few historic instances in the past hundred years or so. Look a little deeper, and you’ll run across literally hundreds more greater and lesser seismic and meteorological disturbances, from Hurricane Andrew in 1992 to the 1989 World Series (Loma Prieta) earthquake – just to name a couple contemporary notable examples. More recently, there was the February 28, 2010 SuperMoon, which well illustrates the storm and seismic potential associated with this alignment. As described in my 2010 World Forecast Highlights, the geocosmic shock window associated with the February 28 SuperMoon ran “from February 25 through March 3,” signaling a “newsworthy upsurge in moderate-to-severe seismic activity (including magnitude 5+ earthquakes and volcanic eruptions), plus strong storms with damaging winds and heavy precipitation; along with extreme high tides.” My forecast described the alignment as “global in scope by definition,” but with “special risk zones” including “west-central South America.” If you donÂ’t remember it, Google the freakish combination of a monster megathrust 8.8-magnitude earthquake in Chile, a Pacific tsunami, the “snow hurricane” in the Northeastern US, and hurricane-force killer winds in France – all happening at once on February 27.

If the Supermoon can have such a powerful effect on the Earth, we can see where it may also have a powerful effect on our psyches.  Not everyone experiences lunar events the same way.  Our astrological charts describe how sensitive we are to different forces: those of us with a great deal of water, especially Cancer, are more sensitive to the Moon.  Those of us with strong Mercury and Uranian influences are more sensitive to electrical forces.  We are all different, which is why there is no way to make predictions that will be effective for everyone. Since the Full Moon opens wide the curtains to the emotional world, the Supermoon does so with even more force.  Don’t be surprised if you find yourself wide open, free of the usual protective coating with which you usually shroud yourself.  We are in the Scorpio realm in this Supermoon, and can find our true power (one of the lessons of Scorpio) only in letting go of any superficiality that doesn’t serve us in our True Purpose.  Of course we are balancing this against the Taurean Sun, which grounds us to the Earth and helps us to find the peace and serenity that recharges and infuses us with a deep inner strength. The effect of any Full Moon generally lasts for a few days after the event.  Allow this lunar energy to open the heart deeply and find that balance between the inner realm and the outer world that gives us our true humanity. for daily planetary cycles visit my Facebook and Twitter pages.