A History of the Astrological Almanac

A History of the Astrological Almanac 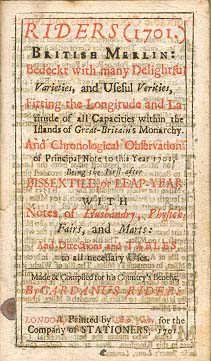 Deb Houlding’s Skyscript site has a fascinating history of the astrological almanac written by Derek Parker, co-writer with his wife Julia of quite a few widely-read astrology books. These almanacs were compendiums of astrological information that was considered useful for physicians and other medical professionals in the early and middle ages, as well as for the general public.

Here are just a few entertaining quotes from this great article:

liked this quote by William Lilly embedded in this article:

It’s far from my thoughts that there’s any binding or inevitable necessity in what I predict by the radiation of heavenly bodies: the stars have no such unlimited laws – they are bounded, and give light to us, or some small glimpses of the great affairs God intends upon earth; but if we rely on our judgement without relation to the immediate rule of His eternal providence, alas, how soon of wise men we become errant fools and idiots!

Lots more can be found here…