A look ahead to April’s Jupiter/Neptune conjunction

A look ahead to April’s Jupiter/Neptune conjunction 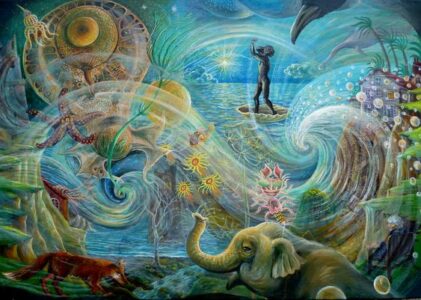 Being an astrologer is a bit like being a meteorologist. You can observe the trends, but you can’t predict the details, at least not with reliable accuracy.

The past few years have been interesting to say the least.  We had the conjunction of Saturn (hardship) and Pluto (death and regeneration) in 2020, which astrologers warned could bring financial and other hardships. With Neptune in Pisces, sign of its modern rulership and associated with viruses, there was an indication of a mysterious illness. But the kind of pandemic of the wide-ranging proportions which we have experienced came as a surprise to all but the most tuned-in virologists.

In 2021 we had the challenging square from Saturn to Uranus, planet of radical change and liberation. Civil unrest, rebellion against Covid control measures…all of this was relatively predictable.

In 2022 we have a conjunction from Jupiter to Neptune on April 12.  Conjunctions from Jupiter to Neptune occur about every twelve years, but what makes this one relatively unique is that Jupiter and Neptune are connected through their co-rulership of Pisces. Jupiter is the traditional ruler of Pisces (with Neptune being the modern ruler), and Jupiter and Neptune share an expansive view of the world, and a desire to bring true meaning into our lives.  However, Jupiter’s focus is more on the expansion of the Self through a pursuit of meaning and Truth where the Neptunian desire to submerge the Self requires an annihilation of individuality for the sake of Universal consciousness and creative inspiration.  It is here where trouble can sometimes occur.

Pisces is represented by two fish swimming in opposite directions, tied by a cord. The cord is the only thing keeping the fish from separating entirely as they are drawn apart from the currents of life. Under the influence of Pisces we are flexible and adaptive, but not proactive. We swim around obstacles rather than prevent them or overcome them.

Everything in astrology contains both a positive and negative expression, and no planetary aspect occurs in a vacuum.  There are always other planetary conditions which affect the outcome.  The conjunction of Jupiter to Neptune in Pisces by itself is not the best time for rational thinking and intelligent planning, especially if you have planets (or angles, meaning ascendant, midheaven etc.) between 20 and 25 degrees of the mutable signs (Pisces, Sagittarius, Gemini, Virgo). But the conjunction of Jupiter to Neptune on April 12th forms a tight trine to the South Node of the past, facilitating the release of old patterns which hold us back from fulfilling our destiny. The transformational planet Pluto harmonizes in a sextile to the conjunction which aids in the emergence of an important catalyst of some kind.

We can utilize the magical power of this conjunction for a journey into the realms which Pisces rules so well: Creativity, imagination, spiritual connection, a yearning for One-ness. Those of us who are prone to escape may end up on the sofa with a bottle of wine watching too much tv, or perhaps seeking escape in some other type of pleasure which seems enjoyable on the surface but dulls the senses. Jupiter is only three degrees away from Neptune now, and we are already seeing its effects and this will continue well past the actual conjunction date – likely through the end of April.

A Jupiter/Neptune conjunction in Pisces makes for a messy war. Jupiter rules publishing, and there is a great deal of confusion (as there has been ever since Neptune entered Pisces in 2011) over media accuracy.  My recommendation over the next few weeks is to utilize the blessings of this Jupiter/Neptune conjunction described above, and avoid the pitfalls of confusion, delusion and illusion wherever possible. The mists will part and clarity will return.