A look at Bono

A look at Bono U2 singer and world-famous philanthropist Bono has been seen canoodling with Penelope Cruz in St. Tropez, leading many to speculate on a relationship between the two. Photos from the Daily Mail certainly seem to confirm a special tie between them, despite Bono’s 25-year marriage to Ali Hewson, mother of his four children.

Bono has lived a life remarkably free from scandal considering his enormous presence as a global rock and roll star, although there were whispers of an affair during a midlife crisis immortalized in the song “New York” in which he wrote:

In New York, I lost it all to you and your vices Still I’m staying on to figure out my mid-life crisis I hit an iceberg in my life You know I’m still afloat You lose your balance, lose your wife In the queue for the lifeboat

Bono’s stability is not surprising considering his astrological chart. [Click to enlarge] 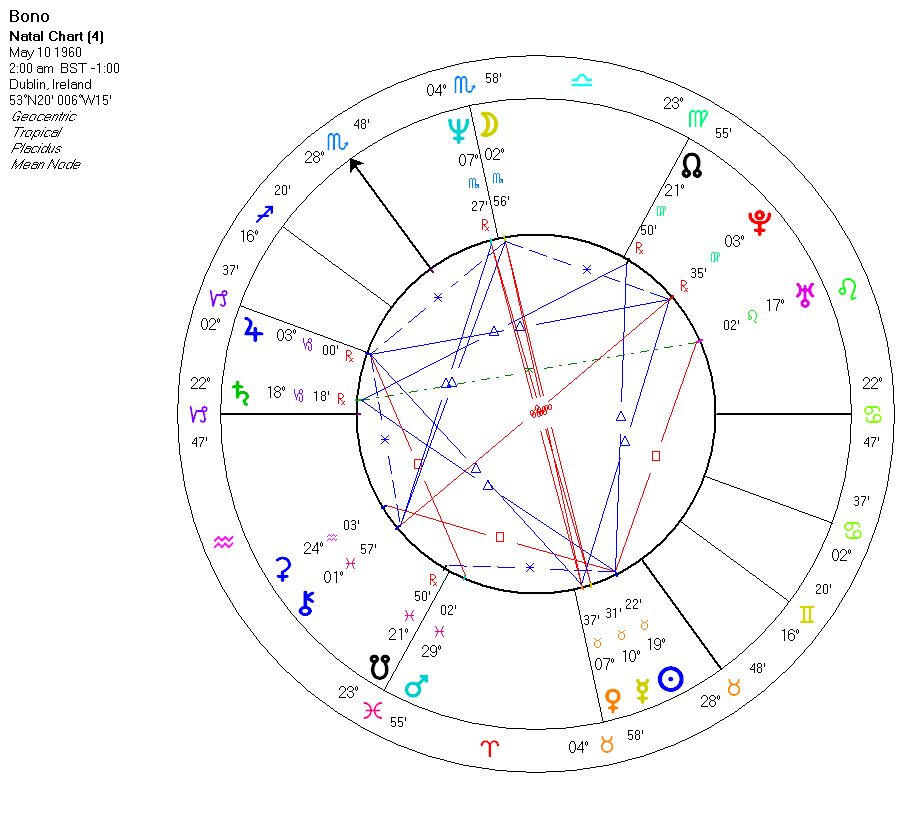 He has three planets in stable and grounded Taurus, including the Sun, Venus and Mercury.

Bono is a practical guy as shown by his Capricorn ascendant (or rising sign) which illustrates the ambition that drives him. The Capricorn influence adds focus and drive to the stability of his Taurus Sun and helps motivate him to achieve his goals in a way that Taurus is often unable to do because they may lack the energy to take action. Taurus dislikes and resists change and is very security conscious. Still, Bono’s Taurus Sun is squared by Uranus, the planet of rebellion and revolution shocks him out of the tendency of the earth signs (Taurus and Capricorn) to embrace convention and conservatism. The Sun/Uranus square is nearly exact and is a powerful influence in Bono’s quest for justice and revolutionary music.

Bono’s musical creativity is shown by the conjunction of the Moon and Neptune in Scorpio. The Moon identifies our emotional nature and Neptune shows our quest for spirituality and an experience with the divine. When the Moon and Neptune are linked, the search for a divine experience becomes intimately personal and is often expressed through music. The Scorpio placement intensifies the emotions and passions that underlie this musical expression.

Bono’s relationships are complicated as shown by the presence of Uranus and Pluto in the seventh house of partnerships. Uranus there identifies him as someone who needs a great deal of autonomy and freedom in a marriage or business partnership, and Pluto in the seventh (part of a Grand Trine in earth planets) indicates that he has a need to transform both himself and his partner through the relationship. The Grand Trine in Bono’s chart is strengthened by sextiles to the Moon/Neptune conjunction, forming a Kite aspect which generally shows an individual with a very strong sense of purpose.

Bono has been going through a fairly difficult cycle of both Saturn and Neptune making difficult aspects to his Sun since the beginning of the year which have put him under quite a bit of pressure. The planets are more favorable for him now so it is not surprising that he is taking a bit of a breather, having a good time with the beautiful people in St. Tropez. Still, this is the chart of someone with a serious role to play on the world stage and it does not appear from the astrology that this flirtation with Penelope Cruz is anything more than a momentary diversion.