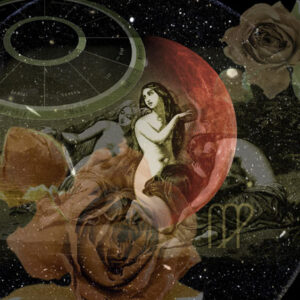 by Lynn Hayes.  At the New Moon the energy of the Sun and Moon unite in a burst of enthusiasm, and each month as the New Moon progresses through the signs we have an opportunity to deepen our understanding of the principles of each sign in sequence.  This year’s Virgo New Moon takes place September 6 at 8:51 pm Eastern time, taking us from the Leo quest for personal satisfaction to a renewed desire to serve and perfect the human experience.  Under Virgo’s vision we are able to see where various aspects of our lives and the lives of others can be improved and sometimes, Virgo can help us to make those improvements in a practical way that has a lasting effect.

With both the Sun and Moon aligned in Virgo, the way to improvement and renewed focus is clear.  Virgo doesn’t get attached to the ego gratification of certain tasks – it’s more about what works, and what will be effective.  Virgo tends to be cautious and perhaps a bit fearful until the steps that point the way forward are made evident, so this may be more of a time of planning than for direct action.

Many of my clients feel very stuck right now.  Some were stuck before the pandemic, and with renewed fears of virus spread there’s a general sense of frustration at the continued limitations imposed on us right now whether willingly or not.  This feeling has a lot to do with the Saturn/Uranus square which is at work in 2021, forcing us to face the limits (Saturn) of liberation (Uranus) and the rebellion (Uranus) against repression (Saturn).

In any case, under Virgo’s influence we can more easily craft a plan to help us to emerge from this maze of blindly moving into an unknown future, and this task is made easier by a harmonious trine from the New Moon to Uranus, planet of radical change and innovation.  This is an exact aspect and therefore quite powerful in its ability to help us to see with new eyes.  Uranus was the sky god, and the planetary influence bestows an ability to see a broader view, the view from the sky.  There is a greater detachment here, and a willingness to break free of thought patterns and beliefs which keep us stuck as the world moves in a new direction. 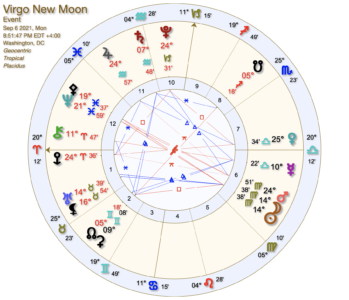 A beautiful trine from Venus to Jupiter is locked into the New Moon chart, and with Venus in its own sign of Libra this could not be a luckier blessing.  However, Venus also squares Pluto which suggests that something must be lost or left behind before the good luck can begin.  Squares from Venus to Pluto can reveal fissures in relationships which aren’t strong to begin with, and power struggles can result.  These are almost always for the highest good of everyone as the truth is revealed for greater growth.

The Virgo New Moon opposes Pallas and Neptune which are both in Pisces.  Pallas represents divine wisdom – the inner knowing that comes from a higher voice within – and in Pisces that voice becomes more transcendent and more of a call to a spiritual purpose.  The connection from Pallas to Neptune helps us to refine that voice and integrate it more completely into our own consciousness, but the opposition to the New Moon creates some tension between this magical consciousness (Pisces) and the focus on the mundane which Virgo prefers.  Oppositions create tension, but CAN be integrated so that we eventually are able to experience the best of both opposing polarities.

At this New Moon, let’s take that dose of Neptunian magic to infuse our Virgoan plans and strategies for the future, allow Uranus to break down some doors of resistance, empower our relationships under Venus/Pluto, and enjoy the good fortune that Venus and Jupiter have to offer. ❤️