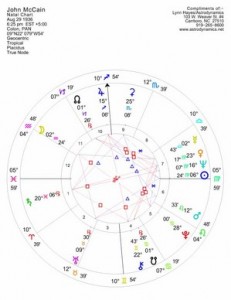 (Click on the image to open up a larger view of the new chart.)

The latest NCGR newsletter reported that this conspiracy site has located a copy of John McCain’s birth certificate with a time listed of 6:25 pm.  I’ve posted this new birth certificate here, the quality isn’t very good but you can see that the birth time of 6:25 pm pretty clearly.

This evening birth time is peculiar because all other discussions of McCain’s time of birth have decided on a time of 9 am or 11 am, both times coming from McCain’s mother who supposedly said  “I awakened and I told Jack, “we’re gonna’ have this baby. This baby came, I think, about 11:00.” (from Astrodatabank).

Michael Wolfstar has posted an update on his website along with some details comparing events of McCain’s life to progressions using the new time. In my earlier analysis of John McCain I avoided reference to the ascendant or midheaven or most of the house placements since the birth time was so suspect.  I will be updating the online article today or tomorrow, but here are a few notes on changes we can see with this new information.

The new chart shows an interesting combination of Pisces rising with Saturn in the first house. The Pisces ascendant has three modes of expression: the martyr/victim, the creative artist, and the savior/saint.  The image of John McCain who has sacrificed all for his country — his slogan “Country First”– is an expression of the Piscean desire to surrender the personal ego for the sake of the greater good.  However, Pisces tends to blur boundaries, and just as we saw with Mitt Romney who had several planets in Pisces, McCain has not taken any firm stands on any of the issues but instead has been more flexible as the climate around him has changed.

With the ascendant ruler (Neptune) and the Sun in the seventh house, he is more likely to develop his identity through association with others (seventh house of partnership) than through a clear sense of his own Self.  The placement of Saturn in the first house, especially retrograde, reveals the strong sense of responsibility that McCain feels in his life, but also the fear (Saturn) that he will not be able to live up to his ideals.  Those with Saturn retrograde in the chart are often very self-critical, and in my original article I discussed the effect of that retrograde Saturn in opposition to Venus which now sits in the seventh house of marriage and partnership.

This new chart has Sagittarius on the Midheaven (cusp of the tenth house of career) with Jupiter in Sagittarius in the tenth.  This is a very fortunate placement that denotes career success with a great deal of travel to foreign lands.  The Moon is no longer in Capricorn as it was with the morning birth time, but it is still opposed by Pluto suggesting a great deal of emotional distress.  Chiron is now in the fourth house of family and ancestral roots as well as the psychological inheritance from the family, indicating that McCain likely has difficult feeling at home anywhere in the world.  He has instead chosen to make his home his career where he feels successful with Jupiter in the career house.

With this new chart, transiting Saturn has been aspecting all of the angles in the chart since last fall, completing the transit of the Midheaven in August.  In early October as his campaign began to fall apart transiting Saturn in Virgo made a square to that Tenth House Jupiter, challenging (Saturn) his natural good fortune and confidence (Jupiter).  But more significantly, his retrograde Saturn by progression has slowed down as it prepares to turn direct in 2017, and it has been sitting within one degree of an exact square to natal Jupiter, moving only one minute each year.  Jupiter in our charts show where we want to be a god – where we feel confident, and eager to accept the bounty of life.  Saturn’s pressure on that Jupiter creates a restlessness and impatience that can be challenging for someone like McCain who has a square of Mars (aggression) to Uranus (rebelllion) which makes Saturnian virtues like patience and discipline very difficult.

Some of our most successful experiences take place under Saturn transits, so this alone would not disqualify McCain for the presidency.  But the mutable Grand Cross that I discuss in the original article, along with a Pisces ascendant, will make it difficult to gather enough strength to cross the finish line.