A Powerhouse of a Week Coming Up!

A Powerhouse of a Week Coming Up! 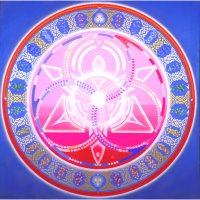 On the morning of Wednesday, March 29 (and for the next few days leading up to it, as well as for several weeks afterward) we will experience a powerful series of planetary events. First up we have a New Moon in Aries with a total solar eclipse, followed shortly by the retrograde turn of Pluto. The New Moon occurs when the conscious solar principle of the Sun conjoins the instinctive lunar principle of the Moon. New moons are times of beginnings; of fresh starts, but during a solar eclipse the light of the Sun (conscious mind) is temporarily obscured and the instincts take over.

This New Moon falls in Aries – the sign of initiation, of fire. Aries represents the renewal of the life force, and traditionally has fallen on the vernal equinox (although due to the precession of the equinoxes this is now only symbolically true). With the conscious principle temporarily suspended by the eclipse, the fiery Aries instincts rule during this period. Our instinct for warfare (Aries) may be strengthened, and efforts to maintain our veneer of socialibility may be frustrated as we operate from pure instinct rather than conscious choice. The effect of all of this instinctive reaction will be to strip away all falsehood from our actions and begin with a clean slate.

Pluto has been slowing down to a crawl before turning retrograde on March 29. Pluto represents issues of power and transformation. Symbolized as the god of the underworld, it tends to bring out that which is hidden and needs to be transformed. On a personal level, Pluto strips from us all things which no longer serve us and leaves us more authentically true to our individual reality. On a global level secrets are revealed and power structures become rebalanced. Pluto will remain retrograde through September.

The chart for the New Moon shows an exact sextile (harmonious aspect) between Chiron in Aquarius and the Sun/Moon conjunction in Aries, indicating that the revelations and new projects initiated during this New Moon will have a healing effect (Chiron) that will create lasting changes that will be of great benefit. However, Chiron is still within range of an opposition to Saturn (see articles elsewhere in this column on the global healing crisis of the Saturn/Chiron opposition), and some challenges are likely to be faced (Saturn) on the road to healing the past and moving successfully into the future.

Mercury, having just turned direct (on Saturday March 25), will conjunct the innovative Uranus on the day of the New Moon, helping us to embrace new (Uranus) ideas (Mercury) and ways of processing our experiences (Mercury). The challenging influence of retrograde Saturn, made stronger by its preparation to turn direct on April 5, will ground these new ideas as it applies pressure to build solid structures through all of this evolution, healing and new energy.

With Mercury now direct and an Aries New Moon focusing these other planetary influences, the next week will offer energy for us to wrap up any processes that are stuck, including divorces, house plans, business ventures. Pluto’s retrograde turn will bring our focus back to the past, but hopefully this time with a new point of view and a new sense of empowerment and wisdom.