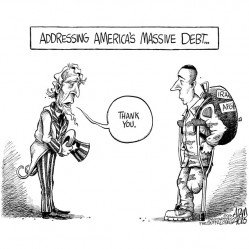 There is little doubt that the United State economy is dependent upon military spending, as shown in a recent study by the University of Alabama at Birmingham.   As is often noted, General and then President Dwight Eisenhower, warned back in 1960 of the dangers of the military-industrial complex in a speech which is eerily as true today as it was fifty years ago:

Throughout America’s adventure in free government, our basic purposes have been to keep the peace; to foster progress in human achievement, and to enhance liberty, dignity and integrity among people and among nations. To strive for less would be unworthy of a free and religious people. Any failure traceable to arrogance, or our lack of comprehension or readiness to sacrifice would inflict upon us grievous hurt both at home and abroad.

Progress toward these noble goals is persistently threatened by the conflict now engulfing the world. It commands our whole attention, absorbs our very beings. We face a hostile ideology — global in scope, atheistic in character, ruthless in purpose, and insidious in method. Unhappily the danger is poses promises to be of indefinite duration. To meet it successfully, there is called for, not so much the emotional and transitory sacrifices of crisis, but rather those which enable us to carry forward steadily, surely, and without complaint the burdens of a prolonged and complex struggle — with liberty the stake. Only thus shall we remain, despite every provocation, on our charted course toward permanent peace and human betterment.

Crises there will continue to be. In meeting them, whether foreign or domestic, great or small, there is a recurring temptation to feel that some spectacular and costly action could become the miraculous solution to all current difficulties. A huge increase in newer elements of our defense; development of unrealistic programs to cure every ill in agriculture; a dramatic expansion in basic and applied research — these and many other possibilities, each possibly promising in itself, may be suggested as the only way to the road we wish to travel….

The total influence — economic, political, even spiritual [of such a large military establishment and a large arms industry] — is felt in every city, every State house, every office of the Federal government. We recognize the imperative need for this development. Yet we must not fail to comprehend its grave implications. Our toil, resources and livelihood are all involved; so is the very structure of our society.

In the councils of government, we must guard against the acquisition of unwarranted influence, whether sought or unsought, by the militaryindustrial complex. The potential for the disastrous rise of misplaced power exists and will persist.

It occurred to me today that Obama can’t get us out of Iraq and Afghanistan, because the economy of our nation is so dependent now upon the military and the industry which supports it.

When Uranus, planet of revolution, moves fully into Aries, the sign that is ruled by the god of war, it will begin a challenging square to Pluto (concentrating power) in Capricorn (structures and establishments) that will be in effect for about three years.  It will be interesting to see what kind of effect this has on the “military industrial complex” as more and more wars (Aries) with faceless enemies (Uranian rebels) necessitate a complete and total transformation in the way these wars are fought.

For now we can only pray for peace and the wisdom of our leaders to begin that transformation before the system rots away from the inside out, and thank the men and women who bravely face untold dangers every day for the beliefs they hold dear.