Now I KNOW we’re in the Aquarian Age! 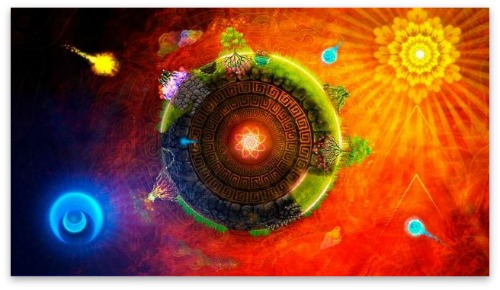 Deepak Chopra, the Ayurvedic physician who has done a great deal to bring holistic healing and Eastern mysticism to the West over the past many years (and fellow Beliefnet blogger)  is working on the creation of a video game to explain how the chakra system works.

Since the game is launching in November of this year it must have been conceived over the past few years when Chiron (which actually rules the energy system that runs through the chakras) and Neptune (spirituality and the arts) were conjunct in Aquarius (technology and innovation).

“Deepak Chopra’s Leela” from THQ Inc. will use the Xbox 360 console’s controller-free, camera-based Kinect system to detect users’ bodies, then guide them through meditation exercises. (An edition for Nintendo’s Wii requires players to hold a controller.) “Leela,” which translates to “play” in Sanskrit, is less of a game and more of an experience, though there are a few gameplay elements.

Seven different interactive exercises based on the seven “chakras,” the points along the body that Chopra says serve as energy centers, task players with moving their bodies to control graphics onscreen set to a soothing soundtrack. The mini-games increase in difficulty, but “Leela” places no importance on a final score or even finishing the exercises.

The root chakra exercise, for example, directs players to tilt their hips to seed a virtual planet, while the heart chakra exercise uses players’ hands to harness fireballs that release gems imbedded in descending rocks.

Now that Chiron and Neptune have moved into Pisces, the sign where boundaries are dissolved and all becomes one, the urge for the spiritual experience of transcendence and oneness will become stronger and more powerful.  Along with this will come greater addiction and escapism, also Neptune/Pisces archetypes.

Using technology to teach about the chakras is an exciting new innovation, but just as with any form of technology the danger is that we become dependent upon the technology rather than the actual experience.  We talk with our friends on Facebook instead of spending time with them.  We listen to our music on compressed mp3s instead of hearing the richness of a live concert.

It’s all doable now,” said Chopra. “We just have to bring it all together. If we can measure what’s happening in your body, your heart, your emotions, your breath and your mind, then there’s no reason why we can’t create a new generation of video games that can help accelerate the personal, psychological, emotional and spiritual development of human beings.”

All well and good, as long as that development goes deeper than the superficial and doesn’t preclude real personal growth.