All about the Halloween Full Moon in Taurus

All about the Halloween Full Moon in Taurus 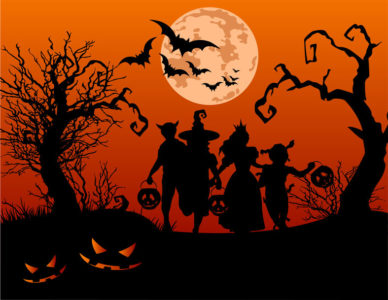 Nothing makes Halloween more Halloween-y than a Full Moon, and with 2020 killing off a great deal of the Halloween holiday that could be just the boost we need.  (Some history: The holiday of Halloween has nothing to do with astrology – the holiday of Saints Day on November 1 was created by Pope Gregory III to distract the peasants from their fire festival of Samhain, which is actually held at the midpoint between the September equinox and December solstice around November 6.  The distraction didn’t really work as the peasants still celebrated their fire festival on the night before All Saints Day, calling it All Hallows Eve which then became Hallowe’en.)

In any case, we have a big Full Moon on October 31st at 10:49 EDT in the sign of Taurus, an earth sign, amplifying the earthy energies of the triple conjunction of Jupiter, Saturn and Pluto all in Capricorn.  The earth element tends to pull our focus to the practical foundations of life – the structure and organization through which all of the other elements flow.  Pluto has been wreaking creative destruction in Capricorn since 2008, with Saturn as an ally for the past year or so.  Jupiter joined the party in early 2020 and expanded the work of Saturn and Pluto to challenge and re-imagine the very basis upon which we craft the solid elements of our lives.

Where Capricorn builds structures for human existence for the sake of the work, Taurus inspires us to ground and center into our very being – to fully inhabit our physical form and enjoy the pleasures of the senses.  With the Moon in Taurus, the Sun is in Scorpio, opposing the Moon and reflecting its light so that the depth of emotions and instincts may shine through the solar light of conscious awareness.

Scorpio is the sign of intense emotional experiences that transform us from the inside out, and along with Taurus are two of the fixed signs, the signs that carry the most power.   Where Taurus longs for peace and comfort, Scorpio demands intensity and passionate involvement.  Where Taurus seeks security, Scorpio is an emotional risk-taker.  And in this Full Moon we find the Moon exactly conjunct Uranus, planet of radical change and the shattering of paradigms.   Where the Taurus Moon instills us with a longing for peace and equanimity, Uranus acts as the disrupter to shake us up and break down any routine or situation in which we have become stuck.  Because the Sun is opposite the Moon at the Full Moon, the Sun is also opposite Uranus defying all instincts to find shelter for comfort.  The Taurus experience which does not care for change, so this Full Moon will not be a comfortable one for many of us.

In this lunation, the Sun and Moon stand alone, unimpeded and unaided by any other planets which makes this a story that will similarly stand alone.  Any Full Moon is an opposition, requiring integration between two polar opposites.  Under the Taurus Full Moon we want to stand still, to find shelter and comfort in the things which are known and help us to feel at ease, but the Scorpio Sun demands that we be courageous and go deep into the emotional darkness to find our Truth.  With the added voice of Uranus, the voice of change urging us to let go of the past, prepare for some kind of paradigm shift or lightning bolt of awakening.

In December Saturn and Jupiter both move into Aquarius, marking a shift of energies.  At this Full Moon Uranus, as modern ruler of Aquarius, comes to herald this global planetary shift and show the way forward.

For daily planetary musings in your inbox, sign up in the sidebar!