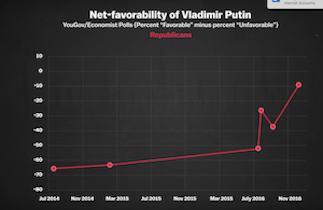 Putin is known as a strongman – he has allegedly ordered the murders of journalists and forcibly invaded other countries just because he could.  Republicans, being from Mars where Democrats are from Venus, respect this kind of power in a way that Democrat-leaning types fear it.

Nations have astrological charts just as individuals do, and in 2014 transiting Pluto began a pass over the US Sun (geeky astrological detail: and the US progressed Jupiter which is beginning to align with the Sun in the natal chart).  Pluto is concerned with issues of power and empowerment, so it’s not surprising that this became more of an issue and something that Americans were grappling with.

This Pluto cycle has now subsided so it will be interesting to see how Americans view the new President’s love of this kind of display of power and whether they will continue to  admire it.