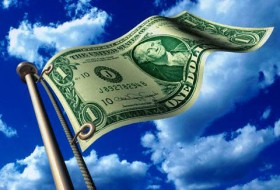 The obsession of the United States with money and the amassing of more and more of it can be seen in the fact that Pluto, the planet of compulsive behavior as well as the experiences that create the death of experience and a regeneration into a new life, is in the second house of money.  The second house is, of course, about more than money: it relates to economic security and the things and concepts that we possess and that we value.

The chart for the United States is extremely expansive in nature, with the Sun in Cancer conjunct Jupiter, the planet of optimism and faith and the desire for bigger and better.  Sun/Jupiter conjunctions typically denote a high degree of luck in an individual, and this is also the case for a national chart.  Jupiter is actually the chart ruler because Sagittarius is rising in the Sibley chart that most astrologers use for the United States.  For an extremely geeky view of why I use the Sibley chart visit this earlier article. Sagittarius, the sign that instills a desire to expand one’s frontiers and find meaning in life, the sign that rules religion and shared philosophies and the pursuit of happiness, is a fitting ascendant for a country that values freedom above all else, or at least claims to.

Pluto in the US chart is in Capricorn at the 27th degree, and because Capricorn rules the structures of society including corporations, governments and financial systems we can see that these entities are part of the shadow.   The US will experience a Pluto return in 2021-23 which ought to be interesting, but in the meantime Pluto’s journey through the sign of Capricorn has, as we’ve been discussing in this blog for nearly three years, been creating some destruction (Pluto) through financial and economic systems (Capricorn) around the world.

The economic downturn has hit the US particularly hard because of this second house Pluto in the US chart, combined with the irrational exuberance of the Sagittarian ascendant and the conjunction of the Sun to Jupiter in the US chart.  That American optimism that has been the bulwark for the American people since its inception has been hit particularly hard by the transit of Pluto through Capricorn for the  first time since the birth of the nation as Pluto was completing the Capricorn journey.

The redistribution of wealth from the middle class to the richest Americans over the past 20 years has been staggering.  Forbes reports that  in just one year the net worth of the 400 wealthiest  Americans rose eight percent.   The United States has the highest percentage of millionaires in the world and historically has had more opportunities for the expansion of wealth than anywhere else in the world (thank you Sagittarius and Jupiter).  Yet while the wealthiest 400 Americans enjoyed an eight percent boost, the US poverty rate climbed to its highest point in 15 years, with one in seven Americans being classified as poor.

For this reason, the US will take longer to climb out of the economic trough created (astrologically) by Pluto’s entry into Capricorn and the other planetary cycles over the past few years.  None of us are doomed to be destroyed by the shadow in our charts, but to overcome the shadow influence we must face it directly and transmute its energy into something that is more productive.  As long as the US political machines continue to hide behind the Sagittarian optimism and refuse to face the dark facts of Pluto in the second house of money, the darkness will continue to destroy the fabric of American life.