The bright side of cancer

The bright side of cancer 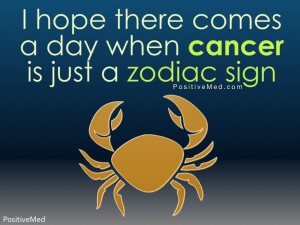 The New York Times had an article by Jane Brody the other day that is so beautiful I had to share it:

Can getting cancer make you happy? For Betty Rollin, survivor of two breast cancers, there’s no question about it. In her newest book, “Here’s the Bright Side,” Ms. Rollin recounts:

“I woke up one morning and realized I was happy. This struck me as weird. Not that I didn’t have all kinds of things to be happy about — love, work, good health, enough money, the usual happy-making stuff. The weird part is, I realized that the source of my happiness was, of all things, cancer — that cancer had everything to do with how good the good parts of my life were.”

Her realization is hardly unique. I have met and read about countless people who, having faced life-threatening illness, end up happier, better able to appreciate the good things and people in their lives, more willing to take the time to smell the roses.

As Ms. Rollin put it: “It turns out there is often — it seems very often — an astonishingly bright side within darkness. People more than survive bum raps: they often thrive on them; they wind up stronger, livelier, happier; they wake up to new insights and new people and do better with the people around them who are not new. In short, they often wind up ahead.”

This is not to suggest that battling cancer is pleasurable. Frustration, anger and grief are natural reactions. Cancer forces people to put their lives on hold. It can cause considerable physical and emotional pain and lasting disfigurement. It may even end in death.

But for many people who make it through, and even for some who do not, the experience gives them a new perspective on life and the people in it. It is as if their antennas become more finely tuned by having faced a mortal threat.

This so exactly defines the modus operandi of Pluto that it gave me chills. Pluto is strong in my chart and though I have never faced a deadly disease I feel an affinity for death and the ending of life. When I counsel people through Pluto transits I hear their amazing stories about facing the end of a life that they knew and being forced into a reconstruction of their very being that leads them into a new and exhilarating process of transformation.

The article goes on with more tales of this process, but the words of Lance Armstrong are particularly powerful, perhaps because we know so much about him:

After surviving treatment for testicular cancer that had spread to his lungs and brain, Mr. Armstrong went on to win the Tour de France a record seven consecutive times.

“There are two Lance Armstrongs, precancer and post,” he recounted in his 2001 memoir, “It’s Not About the Bike: My Journey Back To Life.” “In a way, the old me did die, and I was given a second life.” He created a foundation to inspire and empower people affected by cancer, helping them live life on their own terms.

“Cancer was the best thing that ever happened to me,” he said. “I don’t know why I got the illness, but it did wonders for me, and I wouldn’t want to walk away from it.”

When Elizabeth Edwards was diagnosed last spring I wrote an article about the concept of fighting cancer as really waging war against ourselves. A friend who is an oncology nurse once told me that of all the ways to die she hoped to end up with cancer, because of the amazing transformation that is possible with that disease. It appears that with cancer we are faced with the part of ourselves against which we have battled our whole lives, and in giving up those parts of ourselves perhaps we learn to live life in a more authentic way, even if that process ends up being for a very short time.