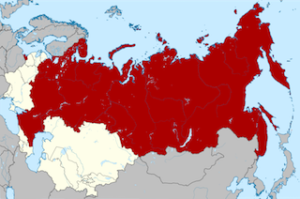 To me the date that makes the most sense from a historical point of view is the date that the Russian Federation declared its independence from the Soviet Union which was June 12, 1990. This is the date that the First Congress of People’s Deputies of the Russian Federation adopted the Declaration on Russia’s National Sovereignty which seems to me to be a very formal declaration of statehood and a strong basis for an astrological chart. This is the day that is celebrated as the Day of Russia and is identified by modern Russians as the birth of their nation.

This chart is a very interesting one, with a 26 degree Virgo ascendant which has been squared by Pluto over the past several years. The Sun in Gemini is prominently placed on the Midheaven showing a changeable nature, and an exact opposition between Venus and Pluto illustrates the destruction and regeneration of many of modern Russia’s alliances since its inception as well as the fact that its partners are its worst enemies.

That quiet Virgoan strategy is offset somewhat by the placement of Mars, denoting the aggressive instincts of the nation, in its own sign of Aries and in the seventh house of partnership. Mars makes a sextile to the Moon, indicating that the soul of the country (Moon) is tied in with its ability to defend itself (Mars). Mars in the seventh house shows a fierce independence in its partnerships as well as an eager willingness to do battle (Mars) with allies (seventh house) in order to prove its autonomy (Aries).

Jupiter in the chart is in Cancer, the sign of tribal affiliation, which tends to show a strong nationalistic fervor in a country; however, Jupiter conjuncts Chiron which reveals a painful process in achieving this. Russia is comprised of over 150 different ethnic groups which do not coexist in easy harmony, and much of the tension in the country results from these warring factions.

Most interesting is the exact opposition of Venus to Pluto in the chart. Venus of course is the planet of relationships, and we have already noted the presence of the god of war (Mars) in the Venus-ruled seventh house. This is not a nation that forges alliances easily, and with both the Sun and Mercury in Gemini there is a tendency to be very changeable in one’s nature and focus at any given time. The opposition of Pluto to Venus shows as I said yesterday that some of Russia’s worst enemies are its partners. This aspect engenders a tremendous amount of fear and distrust.