And now, earthquakes and tsunamis

And now, earthquakes and tsunamis 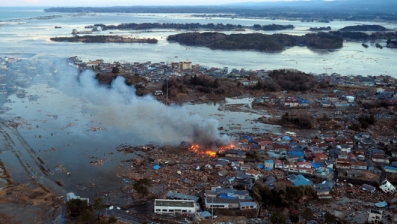 Anyone who has been reading this blog will remember that when Pluto (the destroyer/renewer) entered Capricorn, the Earth sign of material stability, I (and other astrologers) predicted that when Uranus, the planet of radical change, entered Aries and began to form a challenging square to Pluto that earthquakes, pole shifts and other earth changes were likely to occur.

Right on schedule, with Uranus entering Aries today, the largest earthquake ever to hit Japan (8.9 magnitude) struck today, resulting in a tsunami that swept across the Pacific and forced evacuations in California and the entire west coast of the United States.

Meanwhile, Indonesia’s Mount Karangetang also erupted today, just hours after the earthquake in Japan, and new studies suggest that “resting” volcanoes can wake up much more quickly than previously believed possible.  Uranus can be fairy explosive in its actions, and in the fiery sign of Aries is associated with volcanoes and other explosions of fire.

Not only has Uranus just entered Aries, the Planetary K index has been at a high level of 5 for the past 24 hours.  The Planetary K index measures the level of geomagnetic activity, and an elevated K-index can bring about disturbances not only in satellite equipment, but also in the electromagnetic fields with which we are surrounded and in which we live.  So if you are feeling somewhat scattered today it’s probably not your imagination!