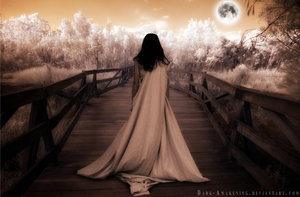 “I Go Now” by Dark Awakening

Harvey’s recent book is entitled The Sun at Midnight, written about his long journey through the dark night of the soul. In the opposition from Saturn to Neptune, many of us are experiencing such a “dark night” in the form of the ending (Saturn) of our illusions (Neptune). Although Pluto is now associated with death and the principle of rebirth, before Pluto was discovered Saturn ruled over death’s domain. Death under Saturn is a cold hard ending as we come face to face with the fragility of our spiritual connections under Neptune. Although Saturn is a stern teacher, the rewards are great and when we face the hard lessons that Saturn brings we are given great rewards. In its opposition to Neptune, adopting or deepening the discipline (Saturn) of a spiritual practice (Neptune) will help to facilitate the progression of our cosmic education.

But there is a deeper death in Harvey’s writings: the death and regeneration that we associate with Pluto. The reclassification of Pluto into a new category along with Ceres and now Eris adds a new complexity to our concept of this transformation that we may not yet have the capacity to understand. Perhaps there is a clue in Harvey’s words from an interview he gave in San Francisco last year:

[Regarding St. John’s “night of the senses” and “night of the soul”] This first dark night purifies all of the senses so that they can become the vehicle of the inner divine self. This first dark night is extreme, but it’s not as extreme as the second dark night. It’s a purification that enables the ordinary senses to start registering the divine world. Through devotion, through meditation, through intense mystical practice, you start to see the divine light. At first it just flashes, and then when the process is complete, you have an overwhelming experience in which you see the entire creation as a manifestation of the light, and your consciousness is one with that. This is not enlightenment. This begins what is called the state of illumination. Although the senses are purified, and although they’re able now to register the divinity of the world, the ego is still subtly present. So there has to be a second death on the path, which is the death of the personal identity. . . .The entire world is now going through a massive crucifixion on all levels. It’s going through an environmental crucifixion — hundreds of species are vanishing every month. It’s going through a personal crucifixion. There are two billion people living on less than a dollar a day. It’s going through a crucifixion of all the patriarchal systems — look at Enron and what it has shown us about Corporate America. Look at the Catholic Churches’ scandals of pedophilia and what it shows us about authority. Look at the growing disillusionment of politicians of all kinds. All of the systems are being exposed as illusory and as fantasy ridden — as deeply corrupt and exploitative.

There’s another kind of crucifixion going on — crucifixion of purpose and hope. Everybody is totally bewildered. They know that the world is potentially on the brink of total apocalypse. There’s a tremendous danger that as people wake up to the horror of what is going on, they will run into political extremism or into fundamentalism of one kind or another. So it’s extremely important that the wisdom of the dark night gets across because if people understand the necessity for this crucifixion, and understand that it’s preparing the resurrection and the birth and an empowerment, then they will be prepared to go through it without fear — or without too much fear — trusting in the logic of the divine transformation.

See, the power that is doing this to us is coming towards us simultaneously with terrifying destruction and extreme grace and prosperity [emphasis added]. The destruction is, in fact, a form of that extreme grace. It’s quite clear that humanity is now terminally ill, and can only be transfigured by a totally shocking revelation of its shadow side. And this is what we’re living through, these shadow sides exploding in every direction because we have done nothing but betray the sacred in us.

You can lose hope. But if you know the wisdom of the dark night, then you are looking out for protection. You’re aware that through this terror, protection will be given. This is the universal testimony. They mystics have gone through this process. It’s the testimony of Rumi. It’s the testimony of the great shamans. It’s the testimony of St. John of the Cross, and it’s the testimony that I gave in this book. And it’s, of course, the testimony of Bede Griffiths. You are given tremendous divine protection, because as the human is being destroyed, the divine consciousness comes up. So one side of you is being annihilated, but the other side is stronger than ever in the ashes. So great dreams will come and light will become more and more vibrant. The divinity of life will become more and more naked to you. Miracles will take place to protect you. To anybody who comes to this path, the divine is both extremely ferocious and extremely tender. Ferocious to destroy the illusions, but tender to give the human being the courage to hang in there and do the work.

It’s becoming more and more clear to me that the newly tripartite nature of Pluto embodies the symbolism of this process: Eris creates the discord and strife that begins the death of the ego under Pluto, and Ceres presides over our emergence from the underworld and the regeneration of our lives.