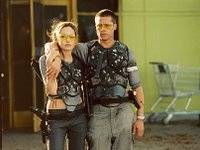 Now that Angelina Jolie and Brad Pitt have announced they are having a baby, I suppose it’s safe to assume they are a couple. My earlier profile of Brad on his birthday shows that Brad has been going through some challenging “midlife crisis transits” that have created lots of disruption in his life. Now let’s see what’s up with Ms. Jolie.

Angelina Jolie is one of the most fascinating women of our time. Aside from her natural beauty which is spectacular, she has a powerful presence and a passion that causes her to throw herself into everything she does. She also has the actor’s ability to lose her own identity in a role and that seems to have spilled over into her personal life as well. While she was married to Billy Bob Thornton she reportedly checked herself into an institution because she was so in love she thought she was losing her mind. Over the past few years Angelina has morphed from a punk girl who engages in self-mutilation to a sleek and sophisticated UN representative who has snagged Brad Pitt. What makes her tick?

Angelina’s Gemini Sun and Mercury gives her an ability and desire that is common among Geminis to try on different lifestyles like they were sets of clothing. Gemini is a mutable (changeable) air sign that is concerned primarily with the mental realm. The sign of the twins, there are often two personalities in the Gemini individual – one dark and one light. Geminis often switch between the dark and light side so quickly that you don’t see it coming. The challenge for Gemini is to integrate the dark and light sides so that they function more as a whole, but often this takes a lifetime to accomplish.

She has four planets in the Warrior sign of Aries: Mars (ruler of Aries), Moon (emotional nature), Jupiter (our search for meaning and opportunity in life) and Chiron (the wounded healer). This tremendous Aries influence gives her the passion for which she is famous: she is a fiery woman who can’t be tamed. It’s not easy for a woman to bear the sword of the Warrior, and it can be a challenge for men who are not supremely confident.

Because Geminis are so fond of trying on different personas, bisexuality is not uncommon among them and Angelina is known for having pursued relationships with women. With her warrior energy that may have been easier than trying to coddle the male ego as well. Angelina’s chart is mostly fire and water, although she does have Venus in Cancer, the sign of nurturing and motherhood (hence her passion for children). The earth element is not represented in her chart which normally indicates someone who is not well grounded and who is not what we call a “physical” person.

Angelina has retrograde Pluto (god of the underworld, intensity and passion) in her third house of mental stimulation, a placement that often brings a fascination with death. In addition, Pluto in her chart opposes (180 degrees) her conjunction of Mars/Moon/Jupiter, giving her that powerful smoldering sexual charisma for which she is known.

The saying “opposites attract” is true in astrology, but we often see that although opposites attract initially, it is difficult to sustain that attraction over time. Quite often in relationships we are attracted to traits in others that we lack, but that isn’t always effective in long term relationships. Angelina has Mercury in Gemini, which is flighty and doesn’t like to be tied down and Brad has Mercury in Capricorn, which is practical and very disciplined. This could lead to communication (Mercury) issues along the way.

The way that each individual’s planets interact with the planets of the other provides lots of interesting information when analyzing relationships. For example, Angelina’s Saturn (limitation and restriction) in Cancer, which squares (conflicts with) the Aries planets in her own chart, also conflicts with the Capricorn planets in Brad’s chart, causing Brad to feel restricted and limited by Angelina.

What does the future look like for Brad and Angie? We saw in Brad’s profile that he is undergoing some significant cycles of change and disruption. Angelina is in a more harmonious cycle, but starting in April Uranus will square her Sun, beginning a period of an intense desire for autonomy and freedom (Uranus). Angelina’s strong Aries influence gives her a fierce independence naturally, and this cycle will exacerbate it and make her even less interested in settling down into a conventional family arrangement.

Brad and Angelina have a rocky road this year, and only hard work, lots of counseling and a strong commitment will carry them through.