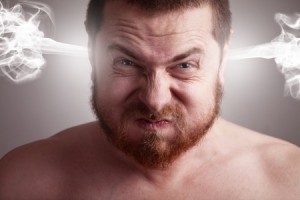 Connections between anger and heart disease are nothing new, and a recent New York Times article announces that anger can set off a heart attack.

Researchers combined data from nine studies of anger outbursts among patients who had had heart attacks, strokes and related problems. Most of the studies used a widely accepted anger assessment scale; one depended on a questionnaire administered to patients.

They found that in the two hours after an outburst of anger, the relative risk of angina and heart attack increased by nearly five times, while the risk of ischemic stroke and cardiac arrhythmia increased by more than three times. The findings appeared in The European Heart Journal.

One might read this and decide that squelching one’s anger is the best way to ward off heart disease, and that concerns me.  I have a bit of a specialty in healing what I call “Mars problems” – issues in the astrological chart where Mars, the planet of desire and need, is afflicted in some way and unable to find its best expression.  What I have seen (and I have to add a big disclaimer here that I have no medical training and this is not to be construed as medical advice) is that when people have Mars problems in the chart they are often more prone to medical events.  (See this article for more information on that subject.)

All emotions hold energy – whether that emotion is fear or grief, or the continuum of Mars emotions which begins with frustration, moves through anger and eventually becomes rage.  When we try to avoid feeling an emotion that begins within us, the energy of that emotion lacks an outlet and builds up internally where eventually it will need release.  If we are unable to release it through the emotional body it will attempt to break through the physical body in health problems and sometimes through the astral body (in which case it can feel like a psychic attack).

Using a more mindful approach to be as aware as possible of what we are feeling and breathing through the energy of those emotions seems to me to be the most effective way of clearing these problems.  Sometimes when we are dealing with anger and rage there are things that need to be expressed – ideally, in a way that is productive and appropriate.

I have clients with Mars problems who tell me they don’t like to get angry because when they do they explode, which in itself is a sign that their anger has gone on too long without an appropriate expression.  If something makes us angry, ideally that problem needs a solution.  Swallowing the anger is NOT a healthy reaction since it neither solves the offending problem nor eliminates our reaction to it.

Mars teaches us to set good boundaries and to express our needs when necessary and appropriate.  If we learn how to befriend Mars and learn the art of self-assertion, there will be no need for Mars to escalate into anger and rage.  It’s a tough lesson to learn, and one that likely takes an entire lifetime.