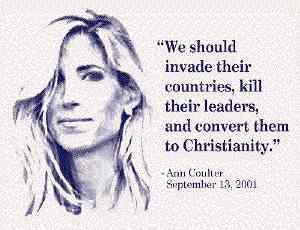 With Ann back in the news, I took a look at her chart to see what motivates her to be so nasty. A birthchart does not create a mean person, and someone else born the same date and time as Ann would handle things differently. But there are some clues in her birthchart that are interesting. Because we don’t have her birth time we can’t set up the ascendant and house structure (the chart linked is a noon chart). But the chart shows a “bundle” formation, which has all of the planets in one half of the chart, showing a person who lacks perspective. Because of Coulter’s hunger for notoriety, my guess is that the planets are at the top half (or hemisphere) of the chart, indicating an individual who is primarily concerned with matters external to oneself rather than introspection.

Ann is a Sagittarius Sun, with Mars, Mercury and Venus all in Sagittarius and very likely her Moon as well. That is a strong stellium in one sign and dominates her chart. Sagittarius (ruled by Jupiter) at its best is visionary, adventurous, bold and optimistic. At its worst, it is judgmental, self-righteous, with a tendency toward self-aggrandisement. Jupiter after all was the King of the Gods, and has never really forgotten it. Sagittarius has an eye for opportunity and has the fiery nature to pursue it. There is a strong need for self-importance, and Sagittarius can be a bit of a groupie, always seeking the “best” people to associate with. The shadow side of Sagittarius results from fear. According to writer Liz Greene, “The Sagittarius is often frightened of making any commitment to the tangible world, because then he’d have to face not only the limitations of form but also the fact that his potential genius might not be quite so boundless and cosmic as he thinks it is.” With five planets in Sag, Coulter’s nature is dominated by this force.

I suspect too that she is caught up in the wave of fame to the point of addiction, and is terrified of falling from Mt. Olympus and becoming mortal again. Because her fame is based upon her ability to shock, as we become more and more desensitized to her words she must drop even bigger bombshells.

Coulter has Mars conjunct the Sun, which is an extremely independent placement but also gives her an Arien quality since Mars, god of war, is the ruler of Aries. A woman with a strong Mars becomes the warrior princess, an Amazon who often relishes her powers of intimidation. In addition, her chart lacks the water element other than Neptune in Scorpio, which is a generational planet and doesn’t provide a conduit for her emotions to flow through. Individuals whose charts are short on water are not always unemotional, but with this much fire and Jupiter in Aquarius, it is safe to say that Coulter lacks the ability to empathize with others. If Coulter’s Moon (emotional nature) is not in fiery Sag, it will be in Capricorn which would drive her to achieve something significant in the world. Either way, this is not an individual who puts much value on emotions.

Pluto, god of death and rebirth, makes a square (challenging) aspect to all four Sagittarius planets (Mars, Sun, Mercury and Venus). This adds a tremendous amount of potential for fear to the chart, as Pluto demands continuous transformation of the individual. If ignored, this type of fear is sometimes channeled into a demand for power and a cruel nature. Pluto in square to Mercury is famous for cruel speech, and Pluto in square to Mars is a signature for a deep and boiling rage which needs to be expressed constructively or it converts to the kind of vitriol we see with Ann Coulter’s writings.

Saturn in Ann’s chart makes no other aspects to any other planet in her chart (we call this “unaspected”). Saturn is a solitary planet – it is serious and concerned with earthly and practical matters. When unaspected in the chart, it tends to show a person who stands alone, who may be unable to connect with others.

It appears that Ann Coulter, with this intensity in her chart and no inner perspective, has chosen to manage these issues by basically vomiting them into the public arena, and the divisive political climate over the past ten years has been only too glad to swallow it. (Please excuse this disgusting reference!) This will only work for her as long as she gets the fame she craves; when her publicity star has stopped shining the real work for her will have to begin or the fear and rage within her will eat her up alive.