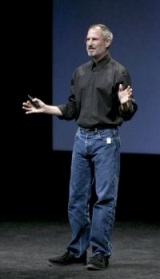 I have found that what I call “Mars problems” are very common in the charts of people with health problems.  When the aggressive instinct (which includes our ability to express our needs, to assert ourselves, and to express anger appropriately) is blocked, that fire energy is left without an appropriate outlet and often discharges within the body’s energy system, leading to a variety of health problems.

Since 2004 when Jobs first had a “neuroendocrine” tumor in the pancreas removed, he has had a series of planetary transits affecting this Mars complex in his chart.  First transiting Chiron (wounding and healing) ran across all of the planets in the complex beginning in June of 2003 (the tumor was discovered in October of that year).  Then Saturn (hardship and disappointment) in 2004 and 2005 (the tumor was removed in July of 2004 after a 9-month battle to find an alternative solution), accompanied by Uranus (radical and restless change) which transited the Ascendant and Sun in Jobs’s chart, stirring the emotional pot and creating the need to alter the status quo.  The combination of Uranus restlessness and Saturn restriction can evoke a frustration that implodes into the physical body if not properly expressed outwardly.

Jobs is just completing a cycle of transiting Chiron over Saturn in his chart which started earlier this year.  Transits of Chiron can bring out areas of imbalance in the body which then manifest as health problems, and Jobs has said that his doctors cannot determine why he is losing weight.  I would guess that Steve Jobs is not very well grounded in his body, and the energy imbalance within is eroding his physical vitality.

In taking a leave of absence, perhaps he will take the steps needed to maintain the inner balance he so badly requires.  If he were my client I would recommend a course of some kind of vigorous physical activity such as Kung Fu which is well suited to Piscean types with Mars problems (the combination of spirituality and aggression in the Eastern martial arts work well here).  Jobs has enough Pisces and Neptune that he will likely pursue just this path.