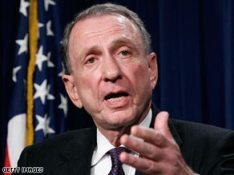 Arlen Specter, a moderate Republican senator from Pennsylvania, has served five terms in the US Senate since he was elected in 1980 but today announced that he is switching to the Democratic party:

I have been a Republican since 1966. I have been working extremely hard for the Party, for its candidates and for the ideals of a Republican Party whose tent is big enough to welcome diverse points of view. While I have been comfortable being a Republican, my Party has not defined who I am. I have taken each issue one at a time and have exercised independent judgment to do what I thought was best for Pennsylvania and the nation.

Since my election in 1980, as part of the Reagan Big Tent, the Republican Party has moved far to the right. Last year, more than 200,000 Republicans in Pennsylvania changed their registration to become Democrats. I now find my political philosophy more in line with Democrats than Republicans.

When I supported the stimulus package, I knew that it would not be popular with the Republican Party. But, I saw the stimulus as necessary to lessen the risk of a far more serious recession than we are now experiencing.

Since then, I have traveled the State, talked to Republican leaders and office-holders and my supporters and I have carefully examined public opinion. It has become clear to me that the stimulus vote caused a schism which makes our differences irreconcilable. On this state of the record, I am unwilling to have my twenty-nine year Senate record judged by the Pennsylvania Republican primary electorate. I have not represented the Republican Party. I have represented the people of Pennsylvania.

I have decided to run for re-election in 2010 in the Democratic primary.

Specter’s note that the schism in the Republican party began at the time of the vote for Obama’s stimulus package is interesting from an astrological perspective because it ties so neatly into the timing of the opposition between Saturn and Uranus that we have been discussing in great detail in this column.  Oppositions occur when two planets are 180 degrees from each other and exert a tension and a pull in each opposite direction.

With Saturn ruling conservatism and Uranus ruling progressive ideas, it’s not surprising that the schism between these two modes of thinking have come to such a frenzied peak.  We Saturn/Uranus opposition began on election day, coinciding with the taking over of the White House by Democrats.  The second phase of the cycle was building at the time of the stimulus vote and peaked just a few days later.

Unfortunately, we don’t have a time of birth for Arlen Specter (2/12/1930, Wichita KS) but his birthchart shows his balance of progressive thinking and conservative values.  Saturn (responsibility and hard work) is in its own sign of Capricorn and therefore a doubly strong significator that these values are an important part of his nature.  Saturn also forms a stressful square to his Moon (emotional nature) which can add a touch of rigidity to the emotional nature.

On the other hand, Jupiter in the chart is in Gemini where it tends to be curious about many different ways of thinking, and we see this reflected in Specter’s desire to be part of the Republican Party when it had a “big tent” that permitted many different views.  Specter has the Sun conjunct Venus in Aquarius where it has been transited by the triple conjunction in the sky right now of Jupiter, Chiron and Neptune.  Jupiter is the planet of expansion and liberation, and when we have a transit of Jupiter we tend to want to be liberated from whatever is holding us back.  Specter suffered a recurrence of cancer last year as Chiron passed over his Leo Moon, and no doubt that caused him to think seriously about his life choices.

The transit of Neptune, planet of transcendence and compassion, across his Sun and Venus has no doubt created a desire within him to serve in a way that connects with him on a deeper and more meaningful level.  The transit of Chiron, the Wounded Healer, has brought him face to face with painful experiences that challenge his ability to realign his true Self (the Sun) in a way that supports his own personal evolution.

Specter’s announcement coincides with the exact transit of Jupiter over his Sun and Venus, suggesting that this change is a liberating event for him.  Michael Steele, chairman of the GOP, suggested that Specter merely changed party affiliations because it would be difficult for him to win the Republican nomination for his next term.  But the transits suggests otherwise – they suggest that this is a major event in Specter’s life that realigns him with his purpose in a way that will energize him for the future.

Jill has a different take on this conversion, as do many others.