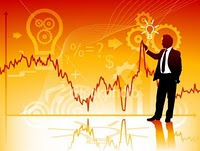 Venus and Jupiter only conjoin for a day or two, but when the two “benefics” get together it’s usually a very pleasant and optimistic time.  Today they conjoin in Pisces, the sign of mystical wonder and illusion.  Jupiter is particularly strong in Pisces because Jupiter is the traditional ruler of Pisces, so the positive energy should be fairly powerful today.

The financial markets are already reflecting this despite the fears over the amount of debt in Greece: Asian markets closed higher, as did Australia and New Zealand stock indexes.  Pisces rules oil, and oil prices took a big hike.

Following the stock market contraction that correlated with the challenging square from Saturn to Pluto at the end of January, planetary optimism is increasing which will likely bring about another rally in the markets.  The Pisces influence will continue as the Sun and Mercury both move into Pisces, and with them an increased ability to see the world through rose-colored glasses.  This is likely to continue until the beginning of March when Mars slows down before turning direct on March 10, followed by a challenging square of Venus to Pluto that will also slow things down or create reversals in the markets.

Disclaimer: This article is for general interest only and is NOT intended to be used as financial advice!!!