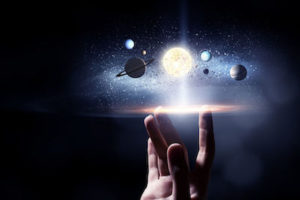 There’s a lot of planetary energies during this period, with three planetary bodies changing signs and two changing direction, as well as a Full Moon!  Read on for all of the details… (dates refer to the Eastern time zone)

Saturn and Pluto turn retrograde. Towards the end of April both Saturn and Pluto will turn retrograde, meaning their apparent motion as we observe the planets will appear to move backwards.  These planetary shifts from retrograde to direct motion mark shifts in direction of focus – the retrograde periods help us to look back into the past and see what is unfinished or what needs to be recreated in order to more fully serve us in the future. Then when a planet turns direct again we are able to make forward strides more effectively.  Saturn and Pluto are preparing for that retrograde turn, they are at a virtual standstill and their influence is more powerful – especially if these planets are hitting sensitive points in your own natal chart (between 18 and 25 degrees of Capricorn, Cancer, Libra and Aries).  Pluto turns retrograde on April 24th and Saturn turns retrograde on April 29th.

Saturn (tests and challenges) and Pluto (creative destruction) are at their closest point now until they collide in their official conjunction in January of 2020.  The combination of these two planets generally denotes a destructive force that can clear the path of any debris that is interfering with the natural movement of the Universe towards balance.  This has the potential to be a positive force, but it is also associated with contraction and challenge, especially now since both planets are in the contracting sign of Capricorn. They are aligned with the South Node of the past, denoting that some karmic cleanup is bound to occur.  This could come in the re-emergence of past relationships, or a karmic debt that comes due. It could simply be the revelation of an old pattern

Mercury in Aries. Mercury will enter Aries April 16th and will remain in that fiery sign until May 6th.  After several long foggy months with Mercury in Pisces, this will come as a welcome relief to many of us!  Mercury presides over the mind and communication, and in Aries we may find ourselves more argumentative and willful, but also more easily able to express ourselves. There is less politeness under Mercury in Aries, and it may be more difficult to compromise and collaborate.  But this is an excellent time for creativity and adventure.

Full Moon in Libra.  This Full Moon on April 19th occurs at the 29th degree of Libra.  The 29th degree is the very last degree of a sign, also called the “critical” or “anaretic” degree. This is a degree of completion and marks the end of one cycle and the evolution into another.  The Full Moon in Libra, the sign of balance and integration, encourages us to find a way to leave behind anything in our lives that is standing in the way of our finding that internal balance.  Something is bound to come to an end in order to help us to continue to grow in that integration and harmony.

The Sun and Moon are in a wide (weak) square formation to Pluto and the lunar nodes, suggesting that this is not only a time of endings but also transition.  The lunar nodes contain a message of destiny as we move from the south node of the past to the north node of the future, and Pluto right now is triggering the past to empty out the cache of old habits in order to move more fully into our own personal evolution.  Pluto is the planet of transformation, so this connection is very significant and is tied into the energies of the Full Moon.

Venus enters Aries and conjoins Chiron. When Venus moves from dreamy Pisces into Aries, also on the 20th, our interactions with others become more assertive and there could be some conflict between personal desires and the needs of those around us.  Venus will align with Chiron (wounding and healing) on the 23rd, potentially triggering old wounds and sensitive places to emerge so that they can be resolved and fully healed.  This can also be a time when important lessons are learned.

Mars square Neptune.  This is a fast moving but potentially debilitating combination of Mars, currently in Gemini, and Neptune.  Mars represents our drive and desires, and in Gemini there is already a bit of a lack of focus and direction.  Gemini craves a wide variety of experiences, and Mars is only too happy to comply.  But when Mars is in a challenging square to Neptune, things can become confusing and there can be a tendency towards depression and a sense of being somewhat lost.  This won’t last long, just between the 26th and the 28th.

To sum up:  There’s a great deal of symbolism here that speaks to closing a door or two in our lives where we may be holding on to an experience that is really finished.  Perhaps we are simply afraid of the future and afraid to move forward.  Planets may appear to move backwards when they are retrograde, but as humans we are urged ever onwards, to grow and to evolve.  It’s only when we resist that pull of change and transition that we feel the pain of it.