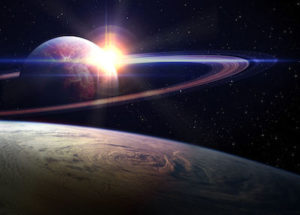 There’s been a lot of action in the astrological skies lately:  Uranus shifting back into Taurus, Chiron moving back into Aries, and a SuperMoon at the Equinox.  Things are settling down some, but the news is not all good because Saturn and Pluto are at the closest point to a conjunction as they will be until they meet next year.

Saturn (tests and challenges) and Pluto (creative destruction) are both in Capricorn and will collide in January of 2020.  The combination of these two planets generally denotes a destructive force that can clear the path of any debris that is interfering with the natural movement of the Universe towards balance.  This has the potential to be a positive force, but it is also associated with contraction and challenge, especially now since both planets are in the contracting sign of Capricorn. Saturn and Pluto will not reach the full conjunction this year, but between the end of March and the end of June they will be close enough that we will begin to feel the belt tightening.  This is not a time for risk taking, especially if your own chart is affected, and we will likely see a recession occur during the summer in the financial markets.

Mercury (mind and communication) is retrograde in the mystical sign of Pisces right now, and on the 25th Mercury aligns with Neptune, the modern ruler of Pisces, to open up the higher creative and inspirational centers.  This alignment will continue a bit after Mercury turns direct, until about April 4th.  The next week is perfect for creative endeavors and anything requiring imagination or spiritual exploration.  It is less excellent for business ventures or making decisions that require a practical and grounded approach, especially with Saturn and Pluto watching like vultures for any misstep.

A quick moving aspect from Venus (love and money) to Uranus (change and innovation) on the 27th could bring a surprise to relationships or financial markets.

With Mercury turning direct on the 28th, and Mars (action) completing its tour through grounded Taurus and moving into chatty Gemini on March 30th, matters of communication and anything having to do with the mind and learning will become much easier and more favorable.  Political and economic situations are likely to be in flux over the next week as the new planetary placements of Uranus in Taurus and Chiron in Aries begin to settle, and Mercury turns direct.

Mars will remain in Gemini until May 15th.  Gemini is a mutable and highly verbal sign associated with matters of communication and information.  Mars in Gemini is driven to explore different ideas and tends not to become stuck in any one philosophy or plan.  I’ll be reporting more about Mars in Gemini next week!