An astrological forecast for 2019

An astrological forecast for 2019 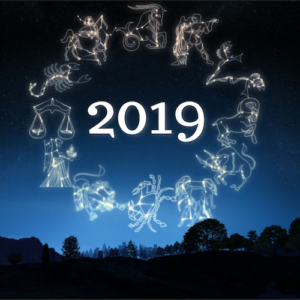 A quick look back

There is a famous Chinese curse that goes something along the lines of “May you live in an interesting age” and that is certainly true of the time that we are living in at the moment.  Fortunately we have at our disposal a tool to make some sense of the chaos that we sometimes see around us:  An understanding of planetary cycles.  While it’s difficult to predict specific events that will take place under a particular planetary cycle, we ARE able to get a sense of the general climate and energies that are available to us or affecting us in some way.

We have emerged from the challenging square aspect between Uranus (radical change) and Pluto (destruction and regeneration) that created so much challenge between 2008 and 2017.  Now that much of dismantling of the power structures has occurred, the rebuilding must take place.  Saturn, the planet that assists in that process, is in its own sign of Capricorn which should help.

In December of 2019 we will have a lineup of five planets in Capricorn.  The last time there was a large stellium in Capricorn was the period between 1988-1989 (see this recent article about individuals born during that time period).  Capricorn is associated with the material world and the structures we create to support it. The last Capricorn stellium witnessed the beginning of the disintegration and restructuring of the Soviet Union, the reunification of East and West Germany, the creation of new governments in the former Eastern Bloc including Hungary, Czechoslovakia and Poland.

Part of the Capricorn Stellium is the approaching conjunction of Saturn to Pluto in that sign.  Although these two don’t officially converge exactly until January 2020, they will come within three degrees of each other between March and July.  Capricorn is not the most optimistic sign of the zodiac, and with Saturn, the planet of pessimism and the reality check, in Capricorn, the tendency is towards creating lasting structures that will withhold the test of time.  This influence is offset somewhat by the fact that Jupiter, the planet of optimism and hope, is in its own sign of Sagittarius.  So we have wild enthusiasm (Jupiter/Sagittarius) combined with dour realism (Saturn/Capricorn) and we are seeing some of this in the wild mood swings of the December financial markets.

Combined with the fact that Uranus, the planet of change, is in Taurus, the sign of stability, I expect that we will see at least an attempt to create new structures to manage a changing world.  New banking regulations or regulatory bodies, significant changes in governmental structures and constitutions – all of these could be in store.

2019 will also bring a challenging square from Jupiter to Neptune in which we are likely to see the less helpful side of both planets as Neptune’s inspiration to transcend and create becomes potentially more of a distraction into the world of self-deception and illusion, encouraged by Jupiter’s desire to continue to expand and seek larger and ever greater experiences.

Fortunately, a harmonious sextile between Saturn and Neptune, the planet of inspiration, spirituality and creativity, will coincide with the Jupiter/Neptune square.  I’ll be writing more about this planetary combination in the next few weeks as we approach the first alignment at the end of January, but for now I’ll just plant a seed of hope and magic for this delightful combination.  With the planet of hard work and achievement (Saturn) supported by the planet that inspires us to transcend the mundane (Neptune), all things are possible in 2019.

All in all an interesting year, with potential for increased creativity and need for spiritual expression combined with a contraction of the economic systems which will continue over the next few years.