Astrological news this week: Aries burns through Jupiter/Neptune fog at the New Moon

Astrological news this week: Aries burns through Jupiter/Neptune fog at the New Moon 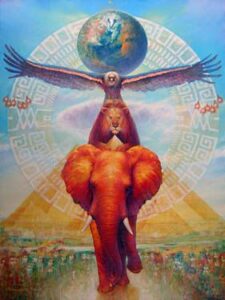 This week as we build towards the conjunction of Jupiter and Neptune that peaks on April 12th (catch up here if you missed my post on the Jupiter/Neptune conjunction) we have a fiery New Moon with three planets plus Chiron all in Aries.

Aries is the first sign of the zodiac – the sign of initiation, blazing a new trail with courage and independence. At its best, Aries approaches life with the innocence of a young child, without fear or hesitation. Aries is ruled by Mars, the planet of action – one of my Aries friends says her motto is “Shoot first, aim later” which very nicely embodies the direct connection in Aries between the desire and action.  The Aries New Moon occurs just after the spring Equinox and it is the New Moon to which Easter is tied. There is a sense of renewal after a long winter (sorry Southern Hemisphere readers!) and an anticipation of what will come next.

The chart for the New Moon shows a tight conjunction from both Mercury and Chiron to the Sun and Moon. The presence of Mercury, planet of the mind, intensifies the focus on all matters of communication.  (Mercury combust Rant: The idea that Mercury conjunct, or combust, the Sun is bad is a widespread concept of well-meaning astrologers whose focus is more theoretical than practical – who have read lots of material but not studied . I have read all kinds of terrible things about Mercury combust the Sun in natal charts – the native is mentally ill, the native is exceptionally selfish… none of these things actually play out in real world astrology. Clients with the Sun conjunct Mercury are in fact some of the most intelligent people such as Mozart, Jimi Hendrix, Jackie Onassis, Joan Baez and many more.*)

In any event, the intense focus on the mind and communication is evident here, as is the focus on healing any painful emotional wounds whose scars can still be felt (Chiron). Chiron is tightly conjunct the Sun and Moon within a degree, and because this Aries stellium is ruled by Mars and Mars is associated with anger and frustration, there may be an emergence of old wounds around needs being met or desires not being achieved.

The conjunction from Jupiter to Neptune with all of its Piscean yearning for creative inspiration and transcendence is embedded in the New Moon chart which suggests that the Aries energies will help to clarify some of the potential confusion that exists in this watery and mystical combination. In addition, the New Moon ruler Mars is teamed up in a triple conjunction with Saturn and Venus, all in Aquarius, lifting the conversation into the realm of idealism and reason. The Aquarius stellium harmonizes with the Aries stellium and adds support to the clarity of energies that stem from desire and emerge into intention. 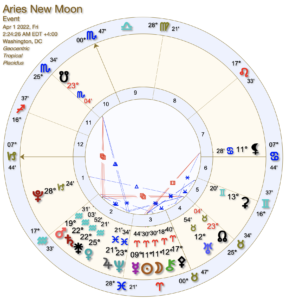 The chart for this New Moon reminds me of a few gangs that are milling about with a lot of energy and not a lot of purpose (rather like the Trucker Convoy of the past few weeks!). We have the Mars, Saturn, Venus gang in Aquarius seeking reason and clarity. We have the Jupiter/Neptune gang in Pisces which is idealistic but confused about purpose. And then four planets in Aries, fired up and ready to go with great ideas and intentions, but somewhat limited by Chironic doubts that must be resolved.

This week’s New Moon occurs on April 1st at 2:27 am EDT so its energies are already beginning to build but will become especially potent early in the morning EDT when the Moon enters Aries.

* Thanks to my friends at Astrotheme for their nifty chart search function.

Here are some of the other things to know about the week. Dates and times are given in Eastern time zone, please adjust for your own locality.

Monday March 28. A conjunction from Venus to Saturn only lasts a day or so but is not the best aspect for human relations. Venus seeks peaceful attachments and Saturn can be cold and feel isolated, but Venus is in Aquarius right now which tends to be more detached anyway and the Aquarius Moon is also tied into this conjunction which also craves space and solitude.  Expect greater responsibilities perhaps, or in general a more serious approach to your interactions with others.

Tuesday March 29. The Moon enters Pisces at 12:31 am EDT and gives a day or two of respite before the Aries fiesta begins.  While in Pisces the Moon harmonizes with Uranus for a bit of excitement around 11 pm.

Wednesday March 30. In my experience, transits involving the lunar nodes aren’t usually experienced directly but they can act like turning points. The Nodes of the Moon represent gateposts for our evolutionary journey from past to future, and transits of the Nodes can suggest that a clue to an important process is revealed, or perhaps in the case of Venus that an interaction can mark an important shift. I usually suggest that we just keep our eyes open at times like this to see if we can detect when something like this occurs.

The Pisces Moon harmonizes with the Nodes on the same day, in a trine to the South Node which helps to resolve something from the past. And the Moon conjoins both Jupiter and Neptune for a general day of good feeling and spiritual emergence. This may not be the best day for anything requiring a great deal of mental focus since the Pisces Moon generally is more right-brain focused.

Thursday March 31. The Moon enters Aries and conjoins Mercury, beginning the march to the New Moon on…

Friday April 1. The Aries New Moon! Be sure you read all of the details in the introduction.

Saturday April 2. Energies from the New Moon linger through most of the day but begin to feel more grounded when the Moon enters Taurus at 12:50 pm EDT. The exact Sun/Mercury conjunction occurs at 7:10 pm and marks the beginning of the Mercury cycle which leads to Mercury retrograde. Our thoughts and words will become even more critical over the next few weeks.

Sunday April 3. Sunday is a day of self-care with Mercury and the Sun both supported by a sextile to Ceres. Ceres teaches us how to feel more comfortable in a physical incarnation, and with all of the Aries energy we may find we need to soothe and calm ourselves a bit under the Taurus Moon on Sunday.  Aries energy is excellent for motivation and inspiring action, but at a certain point we need to step back and ground ourselves and that is what Sunday is perfect for.

I hope you have a great week and an exciting New Moon. ❤️