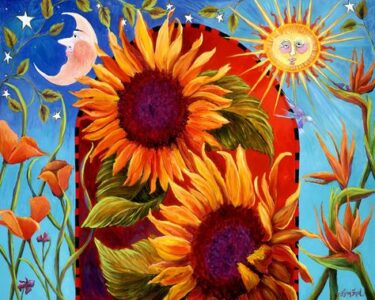 During the solstice the Sun appears to stand still as it beams its nourishing light across the northern Hemisphere.  The energy of the Sun feeds us and is crucial for our vitality, and the Summer Solstice offers a peak of creative potential. This is especially true because the chart for the 2022 June Solstice reveals five planetary bodies (including the Moon and the new planet Eris) in fiery Aries, inspiring action and purification of Will and intention. The fire of Aries is not a friend to the Cancerian energy of the Solstice, and with the Aries Moon along with expansive Jupiter in a challenging square formation to the Solstice Sun there will need to be some kind of adjustment to our intentions in order to be in synchronization with the planetary energies. Fire can be rather impersonal, driving from pure desire and need which does make this a really good time to ask ourselves what we really need, what drives us, what do our passions tell us? Harnessing the desire of Mars-ruled Aries to the rich emotional tapestry of the Cancerian Solstice can serve to help us burn through negative patterns and gain new focus as well a sense of direction. Venus, doubly sweet in her own sign of Taurus, harmonizes with Pluto for stronger partnerships and self-esteem.

Eris has been a troublemaker over the past few years (catch up with this article) with interactions from both Uranus and Pluto. Eris is a troublemaker by nature (the Goddess of Discord afterall!) but under the Uranus and Pluto influences the level of discord has been raised to a ridiculous level in this astrologer’s opinion.  Fortunately the square from Pluto to Eris is in the rear view mirror, but when the tornado has passed the cleanup must begin and that’s where we are currently. A nice sextile from stable Saturn to Eris is embedded in the chart of the Solstice and will provide support in this cleanup effort.

Planetary aspects to Ceres.  This week we have two significant aspects to Ceres, the planet of nourishment and nurturing the body, mind and spirit. I like to think of Ceres as a higher octave of the Moon – where the Moon governs the emotions and need for security, Ceres governs the importance of the fruits of the Earth in nurturing our very incarnation in a physical body, especially in terms of nourishment which feeds the body, but also all of the physical senses and the spirit as well.

Chiron forms a strong square to Ceres this week which could highlight any difficulties we have in this area. Planning delicious meals which feed the body and the soul is always a good idea, but that is especially true this week. This aspect is embedded in the Solstice chart which suggests that nutrition and deprivation may be somewhat of a theme, especially with the level of food insecurity in the world today. Perhaps this is a good time to donate to your favorite food charity! Fortunately, a harmonious aspect from Uranus to Ceres will help to integrate the energetic rebalancing of Uranus into the body and spirit.

Now, here is your forecast for the week. Dates and times are for the Eastern time zone, please adjust for your locality. 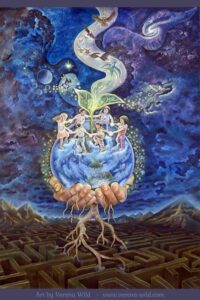 Monday June 20. A sweet dance between Mercury and Jupiter today bestows optimism and general good will, and the Pisces Moon, quite active today, harmonizes with five different planets to promote a positive viewpoint which is a great preface to the Solstice on Tuesday.

Wednesday June 22. Wednesday may be a rather uncomfortable day emotionally, making this an especially important day to honor the self-care described in the opening paragraph regarding Chiron and Ceres. The Aries Moon gets into the action too on Wednesday, triggering last week’s Mars/Chiron aspect which was quite a challenge for some of us (me!).  Trigger is a good word for the Aries Moon which goes right to the heart of the matter and can therefore be a good ally even if it’s not always comfortable. (Chiron square Ceres 3:24 am, Moon conjunct Chiron 5:26 am, square Ceres 5:30 am, conjunct Mars 2:58 pm, sextile Saturn 10:18 pm.)

Thursday June 23.  The Moon makes one last difficult aspect (to Pluto) in the wee hours of the morning, and then enters Taurus to help stabilize and offer shelter from the storm.  The next few days will be a good time to relax and re-center if there were any challenges earlier in the week. (Moon square Pluto 4:02 am, enters Taurus 7:57 am, sextile Sun 12:11 pm.)

Saturday June 25.  The Taurus Moon aligns with the North Node of fate very early in the morning. Aspects to the lunar nodes are not always significant, but they sometimes can indicate that a course correction is underway. It might be interesting to pay attention to dreams on Friday night/Saturday morning to see whether there are any potent symbols to pay attention to.

Otherwise, we have the culmination of a harmonious aspect from Uranus to Ceres which can help us to find that energetic integration described earlier in this post. As the Moon makes its way through the end of Taurus there may be a few hours of desolation under a Saturn aspect in the morning, followed by harmonious planetary energies to lift the spirit. The Moon leaves Taurus for Gemini at 7:13 pm. (Moon conjunct North Node 3:09 am, Uranus sextile Ceres 8:12 am, Moon square Saturn 9:01 am, sextile Neptune 10:05 am, trine Pluto 3:02 pm.)

Sunday June 26. Today brings lovely lunar aspects and the building of harmonious Mercury and Mars aspects which will peak on Monday. A great end to the week!