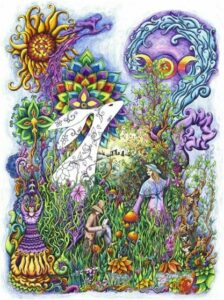 Virgo Full Moon: The Moon will be full in Virgo on March 18, 2022 at 3:17 am EDT, just before the equinox.  Every Full Moon is full of gifts and blessings, and at this time when we have the Sun in a stellium in Pisces encouraging dreams and inspiration but also confusion, the Virgo Moon helps us to ground into our bodies and the physical realm.  Ruled by Mercury, the planet of the mind, it also helps us to ground our thoughts and ideas into a structure and organization that can aid us in finding greater balance. 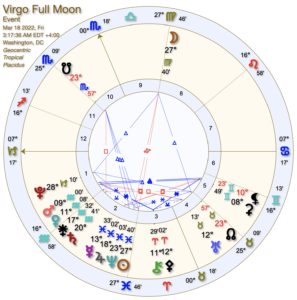 The Full Moon takes the bundle shape of the current planetary configurations and turns it into a bucket formation, with the singleton Moon carrying the weight of the chart. With the Virgo Moon in such an important position, the qualities of Virgo can really help us to find our way through the maelstrom. Virgo cherishes order and self-improvement; there is a focus on health and the balance of the body, mind and spirit, and developing routines that will ground and center us. The Full Moon and the Sun are both in a tight harmonious aspect to Pluto, intensifying the transformative force of the lunation.

With the Full Moon Ruler (Mercury) in dreamy Pisces in a harmonious sextile to Uranus on the 17th but still embedded in the Full Moon chart, the Virgoan routines and order will need to take a completely new form, one that helps us to break out of a box or rut in which we may have found ourselves.

March Equinox:  Also called the Vernal Equinox in the Northern Hemisphere, the March Equinox occurs on March 20, 2022 at 11:33 pm EDT when the Sun enters the sign of Aries. The equinoxes are balance points, the midpoints between the solstices when night and day are in balance, but they are also portals of energy and can facilitate deep shifts in awareness.

The equinox chart includes the continuation of a conjunction of Venus to Mars which has been within range for many weeks, pushing the limits of both planets to break out of the comfort zone. Venus seeks comfort after all, and Mars motivates aggression and defense, and while Venus and Mars attract each other, unless the effort to integrate the soft receptivity of Venus with the hard offense of Mars the result can be uncomfortable indeed.

Uranus squares both Mars and Venus in the equinox chart, pressing for a radical approach to integration and the breaking up of paradigms which we hold onto for security.  Uncomfortable, possibly, but also powerful trajectories for growth. A harmonious aspect from Mercury to Jupiter at the end of the week culminates March 21 at 2:06 am will help to foster goodwill and a positive viewpoint, but also a swelling of imaginative and creative powers!

Other planetary news this week:

I hope you have a beautiful week. ❤️