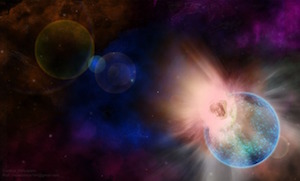 Each time a new planet has been discovered, it has opened a new doorway in the field of astrology.  For thousands of years the visible planets told the entire astrological story, and life was considered to a march towards one inevitable destiny.  The planetary story of the natal chart was either exalted or debilitated, and one was forced to resign oneself to fate.

Beginning in the late 18th century with the discovery of Uranus, the astrological landscape began to change.  A flurry of revolutionary ideologies and a drive towards individuality, the hallmarks of the Uranian influence, spread like wildfire around the world.  Neptune’s discovery in the 19th century led to an increase of spiritual and mystical thought (as opposed to the religious dogma of the church state that was the primary governing force throughout the second millenium of the common era.  Pluto’s entry into the pantheon in 1930 opened the doorway for the great psychological teachers of our time (Freud and Jung) and oversaw the development of the atomic and hydrogen bombs that were later used annhilate a large part of Japan (Pluto rules the underworld of the psyche as well as the process of destruction and regeneration).

Between 1801 and 1804 the four commonly used asteroids (Ceres, Pallas, Juno, Vesta) were discovered, although they were not included in the astrological pantheon until the early 1970s.   Chiron’s discovery in late 1977 was an intriguing event for astrologers because of the difficulty in identifying whether Chiron was an asteroid, a comet, or a small planet (read more about that here) and for many years astrologers grouped Chiron together with the other asteroids although astronomers classified Chiron as one of the Centaur minor planets.

Beginning in 2002 there was a flurry of new discoveries.  Quoaoar, Sedna, Haumea, and then Eris began to captivate the imaginations of astrologers although none of these planets have achieved any kind of widespread use, perhaps because their distance from Earth means that their orbital cycles are too large to have any real immediate meaning in the human experience.  Other planetary objects bandied about by astrologers are Orcus, Ixion, Makemake, and the millions of asteroids of which over 10,000 are named and included in astrological programs.

Some of these new discoveries speak to me and some don’t.  Chiron jumped out and took me on as a student way back in the late 1980s, but the four main asteroids, which I studied at the same time, have never had much to say to me.  I experimented some with Eris in charts but found it not to be useful in my consulting work.  The Black Moon Lilith, which is merely a point and not an astrological body, has been speaking to me ever since I discovered that point sitting right on my Pluto.

In my own work, I have found that introducing too many factors into the chart muddies the water and makes it nearly impossible to scry into the true meaning of the chart.  For me, the symbology works like this:

I will of course continue to read what others have to say and share the latest astronomical news with you so that we can continue to expand our awareness and our knowledge of the way the Universe shapes the world around us!