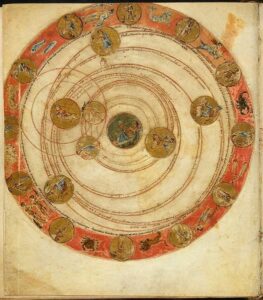 Monday December 6.  Mars forms a sextile to Pluto very early in the morning and this aspect (building since Saturday and Sunday) will remain throughout the day and perhaps a bit into Tuesday as well.  This is a very positive aspect since Pluto, as the “higher octave” of Mars, helps Mars to foster action and assertive behaviors from a more enlightened perspective rather than the brute force with which Mars can sometimes be associated.

The Moon begins the week in stable and grounded Capricorn and is quite active all day Monday, enhancing emotional well being in the morning (trine Uranus, sextile Neptune), but then causing a bit of trouble in the afternoon (conjunct Venus and Pluto, setting off the Venus/Pluto conjunction a little later in the week).  Meanwhile a strong square aspect between Mercury and Neptune is building which will peak on Tuesday, opening up the higher mind to intuition and imagination but making it somewhat less difficult to focus.

Tuesday December 7.  The Mercury/Neptune square culminates at 10:16 am, and meanwhile the Moon moves into Aquarius at 6:48 am. This shifts the focus from the solid and practical into a more electrified approach to life.  Mercury/Neptune can help us to see things a little 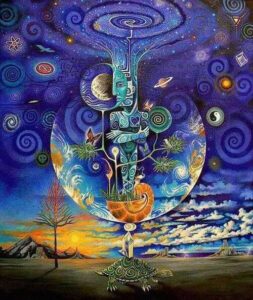 differently, and the Aquarius influence lifts our focus beyond the personal. We also have a strong square building from Mars in Scorpio, where it is strong and willful, to Jupiter which will culminate just after midnight. Confidence and optimism are heightened under this aspect, but with Mercury/Neptune we may not be seeing that clearly so this is not the best time to make a plan which is heavy on optimism and light on facts.

The Moon is quite helpful throughout the day, trine the North Node to help us to focus our energies in a positive way, trine Ceres to help calm our nerves and settle us more fully into the physical plane, and sextile Chiron in the early evening to facilitate the release of emotional tension.  A conjunction of the Moon to Saturn in the late evening may inspire a need for solitude or focused concentration, but remember these lunar events last only for a few hours. (See Wednesday’s note for a caution about sleep on Tuesday night.)

Wednesday December 8.  The Mars/Jupiter influence will last throughout the day, assisted by a square of the Moon to Uranus which amplifies the willfulness and impetuosity of this alignment. This lunar alignment will take place at 2 am and most of us in the US will be sleeping, but my friends in other parts of the world may want to take note. A square from the Aquarius Moon to Uranus is highly charged with electricity, which could make sleeping difficult on Tuesday night.

The Moon settles down after about 6 am and is pretty quiet throughout the rest of the day, harmonizing with the Sun and Mercury in the evening to bring some positive energies.

Thursday December 9.  Thursday and Friday are pretty quiet astrologically, with only lunar aspects. Around 4 am the Moon reactivates the square from Mars to Jupiter which could promote irritability and restlessness, but the Moon moves into Pisces at 9:53 am which will soothe and calm the nervous system.

Friday December 10.  Friday continues to be quiet, and the Pisces Moon inspires a yearning for peaceful feelings.  The Pisces Moon conjoins Neptune, the transformational ruler of Pisces, late in the evening and amplifies this transcendence even more but the Venus/Pluto conjunction which has been building all week will culminate on Saturday.

Venus transits don’t usually have a very strong impact, and they don’t typically last more than a day or two. But when a planet is preparing to turn retrograde it is closest to the Earth and seems to be moving more slowly in the sky which extends the length of any planetary interaction and that’s what is happening here.

Saturday December 11.  The Venus/Pluto conjunction peaks just before noon, and coincides with a harmonious aspect from Mercury to Jupiter which is a great boon in this situation.  Mercury is in Sagittarius where it is naturally optimistic, and harmonizing with Jupiter which rules Sagittarius.  That makes this a particularly optimistic and hopeful day which will be quite helpful in managing any relationship issues that come up with Venus and Pluto.

One thing to note is that Venus does govern wealth and money, and Pluto tends to bring about challenging situations if we are following a wrong path (such as investing our nest egg in an enterprise that seems too good to be true).   Because the Venus/Pluto cycle is so long during this retrograde, it is a good idea to exercise caution when dealing with finances and be sure that whatever steps you take are ultimately for the highest good.

Meanwhile all day Saturday the Sagittarius Sun is building towards a challenging square to Neptune that will culminate just after midnight on Sunday. Under Neptune’s influence we sometimes don’t see things just the way they are, so try to ensure that the hopefulness of the Jupiter/Sagittarius influence doesn’t fog up your reality glasses!

The Moon will enter Aries at 2:39 pm on Saturday and light a fire to inspire and energize.

Sunday December 12. The square of the Sun to Neptune will remain in effect throughout the day as it begins to wane, so continue to exercise some caution. This may be difficult because under the Aries Moon we can be somewhat impatient. Fortunately the Moon is relatively quiet other than a conjunction to Chiron in the morning to release stuck emotional energies.

On Monday December 13 Mars and Mercury will both change signs, Mars moving into Sagittarius which will be a nice lift, and Mercury into Capricorn to help us stay organized.

I hope you have a good and healthy week!