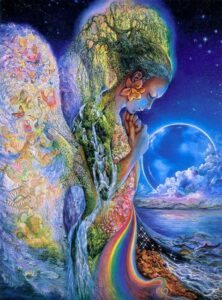 In any case, Mars in Scorpio harmonizes in a trine to Neptune early in the week, a helpful alignment to help us to utilize the inspiration of Neptune to enhance a spiritual practice or creative endeavor.

The solar eclipse on December 4th is in Sagittarius, the sign of philosophy, optimism, and an expanded vision. The eclipse falls on the South Node, helping us to release something from the past which is no longer needed. Being an eclipse, a doorway to consciousness may be opened in order for something important to be realized, and in a solar eclipse the light of the Sun is eclipsed by the lunar light of instinct and emotion which prevails.

The Sun and Moon are in a wide square to Neptune at the time of the eclipse, which could force us to face up to areas of our lives where we might be deceiving ourselves, exposing a blind spot or area of our life in which we have been deluded.  Mercury, planet of information and communication, is conjunct the Sun and Moon to bring in the mental realm to assist in the processing of experiences at this time, but the square from Mercury to Neptune is even tighter. At times like this our intuition is the clearest source of wisdom we can get – it’s a time to rely on gut instinct more than what we imagine to be true.

Other passages of note this week (dates and times are for the Eastern time zone):