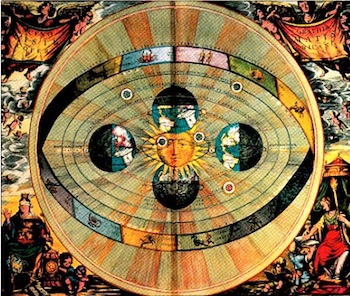 There are no outer planet alignments.  The outer planets (Uranus, Neptune and Pluto) are the big movers and shakers. I think of them as transformational forces that inspire us to evolve and change, and when they interact with each other they stimulate powerful changes in the world around us as well as in our inner worlds.  In 2018 there are no major aspects between the outer planets, and no significant stressful aspects even of Jupiter or Saturn.  Without these dramatic planetary incidents to rock and shake our world, the necessary rebuilding of the human condition can take place much more easily.

Four of the eclipses fall on the Leo/Aquarius axis.   The Leo/Aquarius polarity is about balancing our individual needs and desires (Leo) with the needs of the collective (Aquarius).  Leo is a highly personal sign which craves personal development and individual expression; Aquarius seeks to transcend the personal and to express the Self through interaction with community.  Neither is better than the other, but with four eclipses triggering this dynamic we will be working towards integrating our personal desires for a better life into the fabric of the needs of the collective communities in which we build our lives.

Here are the dates for the 2018 eclipses:

Three important planets will be in Earth signs.  Earth signs help to ground us and enforce a practical perspective.  Earth is not exciting like Fire nor stimulating like Air, but it can be a welcome respite from chaos and intense transformation. Pluto is already in Capricorn (since 2008) as noted above.  Saturn moved into Capricorn in December 2017 and will remain in that sign until March 21, 2020.  Saturn and Pluto can be a bit heavy handed and when they aspect each other things get a bit intense, but that won’t occur until 2020 so there is no reason to be concerned quite yet.

We also have Uranus, planet of radical change, moving into the stable and grounded sign of Taurus in May of 2018.  I’ll be writing more about that over the coming months but that will serve to calm down the intense radical nature of the political energies over the past seven years of Uranus in fiery Aries.

Chiron will enter Aries April 17, 2018.  Chiron is the planet that regulates the healing process in the body, mind, spirit system by triggering psychospiritual wounds that are ready to emerge and heal.  Chiron has been in in the spiritual/creative sign of Pisces since 2010, challenging boundaries and pointing out where our illusions have given us the greatest problems.  Aries is the sign of individual self-motivation, an important aspect of self-development.  Taken to extremes, however, self-motivation can turn into selfishness and greed. In Aries, Chiron acts on the level of the individual to challenge our sense of Self and self-confidence.  On the global level it will reveal the societal wounds caused by individual selfishness.  Chiron will be in Aries until 2026.

Stay tuned for more information on these planetary cycles!  Many blessings and wishes for a beautiful 2018.