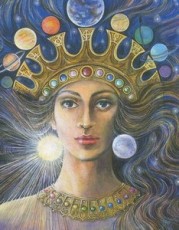 Most of the so-called Christian holidays have deep roots in astrotheology, and Easter is no different.  The very dating of Easter, the great holiday of resurrection, is based on the timing of the first Full Moon after the vernal equinox.

This week I’ll be posting articles correlating astrology, or astrotheology, and Easter.  Today’s post comes from Beth Turnage and focuses on one of my favorite stories: the descent of Inanna.  Often I tell this story to clients who are undergoing transits of Pluto that require them to venture into the Underworld and like Inanna, be stripped of all veneer and fakery that prevents them from experiencing The Big Truth.

[Inanna’s]  story is a journey of development and evolution. The young Inanna rescues the huluppu-tree, the sacred tree, (whose four main branches pointed to each of he cardinal points) when a flood has carried it into the river; she plants this tree in her garden so that eventually its wood can be used to make her “shining throne” and “her shining bed”. From the beginning, her desire for rulership is paramount, and she is angry and frustrated because the older deities have all the me, the manifestations of authority, wisdom and ability. …

But Inanna’s twin sister, Ereshkigal, had a dominion all her own before Inanna secured her earthly authority, the Underworld. There she judged the souls of the dead. Barren though it was, it was a place of ultimate power, as even the other gods feared to entered and face the Voice of Ereshkigal, the ultimate judge, who could seal even the gods away into the depths of the Underworld.

Inanna is not satisfied with being just the Queen of Heaven, so she decides to face her sister in the Underworld. Under the pretext of attending the funeral of Ereshkigal’s husband’s funeral she demands admittance at the Gates of the Underworld. Wearing all her finery, and symbols of her earthly and heavenly power, to gain admittance she is forced to strip naked, giving up a different item as she passes through each of the seven gates of hell. Thus she arrives in front of her grief stricken sister naked yet not humbled. It is clear to Ereshkigal that Inanna arrives not in sympathy, but with ulterior motives.

Ereshkigal, in grief over her husband’s death, has no patience with Inanna, her pride, or her thin pretense to enter the Underworld. With her fearsome Voice, she judges, Inanna, finding her wanting in virtue, and in the process dries up the body of Inanna into a desiccated corpse. She hangs Inanna’s naked corpse on the walls of the Underworld where it hangs for three days.

Having taken the power of Inanna, she now experiences the flip side of fertility, the agony of the pains of childbirth.  Thus with one goddess dead and another incapacitated by excruciating pain, on the third day, grandfather God Enki steps in by creating two sexless creatures from the dirt under his fingernails. These creatures, not being of the living, were easily able to pass through the gates of the Underworld, and in coming to Ereshkigal, mourn with Ereshkigal, echoing all her grief and sorrow. Thus Ereshkigal was comforted and she was so grateful she offered gifts to them. The creatures asked only for the body of Inanna, which they took and using the water of life given to them by Enki, brings her back to life.

Resurrection Week will continue here at Astrological Musings while Mercury slows down as it prepares to turn direct next week.