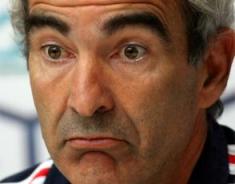 The coach of the French soccer team, Raymond Domenech, fancies himself an astrologer and has decided to avoid Scorpios when picking his team.

When Domenech took over from Jacques Santini in 2004 it looked to have ended the international career of Robert Pires.

It was then reported, before the World Cup in Germany, that Domenech had problems with the former Arsenal player because of his Scorpio star sign.

The former Arsenal player said at the time: “I must be annoying him. It’s like being at school. It’s like I’m 20 years old and playing football for the first time.” Pires has not played since, despite his continued for Spanish side Villarreal.

The France coach once admitted that a player’s international career could be at threat thanks to astrogy and it seems that Scorpios are not the only sign under the spotlight.

“When I have got a Leo in defence, I’ve always got my gun ready, as I know he’s going to want to show off at one moment or another and cost us,” he confessed.

It seems that it is not just down to players’ form, as Domenech states that “all parameters have to be considered and I have added one by saying there is astrology involved”.

Domenech has William Gallas, Gael Clichy, Julien Escude and Sebastien Squillaci in his squad, but all four have Leo as their star sign.

First of all, the term “star sign” is erroneous, Leo would be the SUN sign, not the STAR sign.  In any case, as my intelligent readers know, the Sun sign is only one part of the entirety that makes up the birthchart and Domenech’s strategy failed to give him a win in the World Cup tournament.  Ironically, despite Domenech’s choice of Leos, a fire sign, for his team this reviewer wrote that the French team lacked the firepower to beat any team.

If I were a football coach I would want players with Scorpio energy because they have to win!  They have tremendous drive and do not like to lose, with Pluto ruling their chart, power is all-important for them.  So why does Domenech dislike them?

Raymond Domenech (1/24/52, Lyon France, time unknown) has the Sun in Aquarius forming a challenging square to Mars in Scorpio.  His conflict with Scorpios originates in his own chart!   The detachment and idealism of Aquarius has no patience for the emotional entanglements and power struggles of Scorpio, and that Scorpio Mars is the only personal planet in his chart in a water sign.  I suspect that when he encounters that Scorpio energy he is put immediately on the defensive because it brings out that inner conflict within him and creates an immediate imbalance of power.

Domenech has the reputation of being quirky, as is typical of those with Aquarius influences in their chart.  And astrology itself is associated with the sign of Aquarius, which melds scientific reasoning with innovative new concepts and understanding.  But looking at sun signs alone does not an astrologer make, and Domenech does the field of astrology a disservice by attempting to use astrology without giving it some serious study.