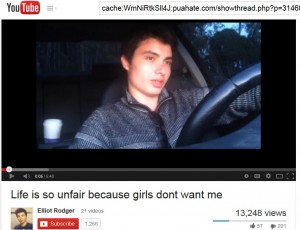 On May 23, 2014 Eliot Rodger, a 22-year old former student, went on a shooting rampage that killed six people and wounded thirteen others.  Rodger, a young man who was desperate for attention and felt invisible according to his writings, left a series of Youtube videos and a 107,000 word treatise detailing virtually every detail about his life and the road to sexual obsession and rage that fueled his “Day of Retribution” against the women who rejected him and the men whom they chose instead.  While this “manifesto” is horrific and appalling, it does make it easier for the astrologer to profile this individual and attempt to find some idea of why an individual would pursue such drastic measures.

Before I present the profile to you I would like to reiterate that while this is an extremely difficult chart, other individuals born the same day, with virtually identical charts other than the exact Moon and Ascendant/Midheaven positions, are not mass murderers.  In fact, one young person born that day, Emily Rickards, has a successful acting career and Lin Yue, also born the same day, is an Olympic gold medalist in diving.  However, in analyzing the astrological chart we can see how an innately difficult personality challenge as revealed in the chart can combine with mental illness and poor choices to result in criminal behavior.

UPDATE: Originally I rectified the time to 2:30 pm.  (Rectified birthtimes are little more than educated guesses and should never be taken as verified times, no matter how skillful the astrologer claims to be.)  This chart works beautifully, it makes sense, and I was very pleased with it.  Unfortunately it is likely not  correct since Rodger’s “manifesto” said he was born in the morning.  You can view the rectified chart here.

An accurate birthtime helps us to identify the Ascendant, but because the Ascendant shows the way an individual lives their life and approaches the world we can make an educated guess.  Rodger was obsessed with power and sexuality – both fall under the domain of Scorpio and its modern ruler Pluto. He writes: “By nature I am a jealous person.”  The positive manifestation of Scorpio is empowerment at the highest level – achieving our soul’s destiny and living in harmony with our higher self.  But Scorpio and Pluto can also operate in the lower realm of consciousness where we find rage, jealousy and obsession.

If we put Scorpio on the Ascendant, Pluto lands in the first house of the personal identity and the obsession with vengeance and a personal expression of power and rage becomes more clear.  Rodger’s writings tell us that by age nine his jealousy “sprang to the surface” which suggests that at that time the Scorpio ascendant may have progressed to align with Pluto, fully activating the intensity with which Scorpio/Pluto drives the individual to travel into the Underworld and fully experience the dark unconscious. (Astrologers: This is how I came to place the Ascendant degree at 8.)  Ideally, we just visit the Underworld and then emerge unscathed with greater wisdom and personal empowerment, but some people become stuck there, fascinated by the promise of great power.

As I said, this all worked beautifully but is likely not  correct.  We will never know.

Rodgers was born with the Sun in Leo – the sign of the Divine Child.  Leo is ruled by the Sun, so individuals with the Sun in Leo feel a powerful need to shine in the world.  This is not always apparent, either to the individuals or to others around them, because other factors can stand in the way of that self-expression.  A Virgo Moon, for example, will hinder the Sun’s ability to shine, creating conflicts.  But whether or not the need for recognition is operating consciously, it is a driving force for Leo Sun people.

His Sun conjoins Chiron, the planet of wounding and healing.  Sun/Chiron people come into this life with an extraordinary level of emotional sensitivity – I think of them as being similar to burn victims where the protective layer has been damaged leaving the nerves exposed.  Because it is Chiron’s job to bring up old wounds so that they can be healed, ideally the Sun/Chiron person will seek help in navigating this healing process so that they ultimately, once the wounds have been healed, become the healers themselves. Sometimes, as in the case of Eliot Rodger, the individual gets stuck in the wounds and a cycle of blame which prevents the healing process from taking place.

The wounding/healing process is made more challenging by the opposition of Saturn, the Celestial Teacher, to the Sun/Chiron combination.  When Saturn is opposite the Sun there can be distance from the father, since both Saturn and the Sun represent the paternal influence.  We see in Rodger’s “manifesto” that his life was happy until age seven (incidentally the time of the first cross of transiting Saturn to this painful combination in his chart) when his parents moved out.  His father went on to marry another woman, they had another child who did not suffer from the same emotional challenges, and Rodger felt isolated and alone.

The opposition (180 degree angle) of Saturn to Chiron makes the process of consciously working (Saturn) to find healing (Chiron) that much more intense.  So every seven years, when transiting Saturn in the sky makes an angle to Saturn in the birthchart, the enormity of the wounds are felt with excruciating clarity.

I have many clients with this exact formation, and none of them are criminals.  They have felt this emotional wounding, and they are in the process, to varying degrees, of working through the wounds.  Many of them are gifted healers.  But to reach this point requires a strong will and intention, and the choice to find healing rather than to take the easy route of blame.

His Moon was in Capricorn, reflecting his need to achieve something in the world.  This need for achievement became twisted into a desire to win the lottery, thinking that if he was rich he would finally gain the respect and admiration he craved.  His Capricorn Moon conjoined Uranus, the planet of autonomy and radical behavior.  Moon/Uranus people find it difficult to bond with others – there can be a lack of empathy or sensitivity if there are not other planets in water signs that offset the dry detachment of Uranus.

Jupiter is also in Leo along with the Sun/Chiron conjunction, and it forms a square to Pluto.  The square of Jupiter to Pluto shows someone who is very definite and unyielding in their views (I have this in my own chart!) and someone who can be very dogmatic.  (The higher expression bestows a deep knowing and conviction based on one’s own inner guidance.)

Eliot Rodger was born under the Uranus/Neptune conjunction, the period between 1991 and 1993 or so when Uranus and Neptune aligned in the sky.  I will be writing more about this generation who is just beginning now to grow up – they are exceptionally sensitive and creative, and have the potential to be open more easily to higher centers of awareness.  But this conjunction, which involves a radical departure from conventional society (Uranus) combined with a longing to transcend the physical world (Neptune) can also denote someone who is unable to easily grasp the realities of living in the material world.

In Part II I will pull all of this together and look at the planetary cycles that correlated with the deterioration of this young man and his ultimate act of destruction.