The astrology of George Clooney’s engagement

The astrology of George Clooney’s engagement 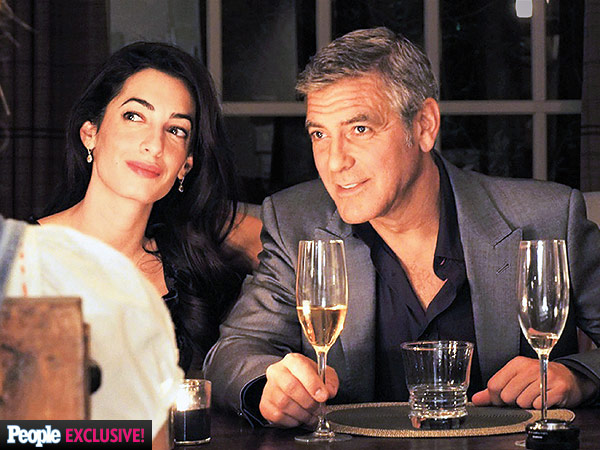 The world’s most eligible bachelor is off the market – George Clooney has renounced his claim that he will never marry again and has become engaged to Amal Alamuddin, British human rights attorney.

George Clooney’s astrological chart here. George’s Sun is in Taurus, the sign of earthly delights, stability, security. Taureans crave a peaceful and serene environment and typically do not like change, but because his Sun is conjunct Mercury (the messenger god and ruler of communication and information), there is a part of him that will also crave a variety of experiences. His Moon, representing our need for emotional security, is in Capricorn and it is conjunct Saturn, the planet that rules Capricorn. This is what we astrologers call a “double whammy,” indicating that the Saturn/Capricorn principle of hard work and solitude is fused with his emotional needs. Saturn/Moon people need lots of alone time–often in their childhood they can be extremely lonely and unable to connect, and in later years this becomes a need for solitude in order to refresh one’s sense of safety.

Mars (personal drive and will) is in Leo in George’s chart, and this is where we find his prankster nature and love of practical jokes for which he is well known. Venus (relating to others) is in Aries, showing that George likes to take the lead in relationships. He in fact has been quoted as saying that he likes to be the one that pursues women, and not the other way around. With Mars and Venus both in fire signs (Leo and Aries), he has a natural exuberance. But I suspect very few people are able to get close to George because of the Saturn/Moon conjunction. This conjunction could also be responsible for George’s constant digestive/ulcer problems, since the Moon rules the stomach.

Chiron is a recently discovered planet or planetoid that shows where we have been imprinted with a deep wound that doesn’t heal, but which motivates us to change and evolve. George has Chiron right on the ascendant or rising sign, and it is opposite Pluto, the god of endings and transformation, which conjoins the descendant.

The ascendant/descendant axis describes our inner journey to balance the creation of our own identity (ascendant) with our need to connect with others (descendant).  Chiron on the ascendant shows someone who is driven by their own woundedness to help to find greater expression of healing in their daily life and in the lives of others.  Chiron/Ascendant people are rarely satisfied to find comfort in their inner world, it must be expressed outwardly.

So why is he ready now for marriage after all these years?  Of course there is the passage of time, which tends to help us to evolve and grow and work through many of our issues so that we can hopefully lead more productive and happier lives.  But there are some astrological factors at work here.

First of all, Neptune, the planet of romance and fantasy, spirituality and yes, illusion, is crossing his ascendant.  This transit can enhance the stars in our eyes and create delusions of love and romance, but it can also open up hearts that have been closed and help to soften our resistance to love.   Also, Uranus, the planet of radical change, is transiting his natal Venus – an influence that can wake up something latent within us and give us a new perspective, turning our previously held beliefs upside down.

George’s progressed Venus has aligned with Mercury in his natal chart, encouraging him to open up his mind (Mercury) to love and relationships (Venus).

The two first met in October 2013 when transiting Jupiter was aspecting both his natal Venus and progressed Venus, activating his desire for love and connection.  Saturn transits to Venus can cause relationship problems since Saturn creates challenges and limitations, but they also can evoke a desire for structure and Saturn is also transiting Venus right now.

There is also a big transit of Pluto (endings and transformation) in a challenging aspect to his Venus that began at the end of February.  Pluto/Venus transits are generally known for ending relationships, but they can also help us to dig more deeply into our inner fears and motivations, giving us the courage to find transformation where our relationships are concerned.  This would not normally be considered the most favorable aspect for marriage but because Pluto is so active in his natal chart this is a time when the inner recesses of his psyche will be unlocked and real change can occur.

I am a big fan of George Clooney and it seems he has met his match.