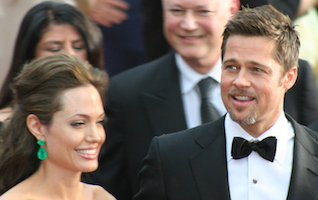 The saying “opposites attract” is true in astrology, but we often see that although opposites attract initially, it is difficult to sustain that attraction over time. Quite often in relationships we are attracted to traits in others that we lack, but that isn’t always effective in long term relationships. Angelina has Mercury in Gemini, which is flighty and doesn’t like to be tied down and Brad has Mercury in Capricorn, which is practical and very disciplined. This could lead to communication (Mercury) issues along the way.

The way that each individual’s planets interact with the planets of the other provides lots of interesting information when analyzing relationships. For example, Angelina’s Saturn (limitation and restriction) in Cancer, which squares (conflicts with) the Aries planets in her own chart, also conflicts with the Capricorn planets in Brad’s chart, causing Brad to feel restricted and limited by Angelina.

The astrological beginnings of the relationship

When Brad and Angelina first cemented their relationship, Angelina was going through her first Saturn Return, the period of moving into adulthood when we recognize that time is short and we need to begin to do something worthwhile with our lives.  At the time their relationship became public transiting Saturn was sitting right on Jolie’s Venus, preparing her for commitment.

During this same period Brad Pitt, who was married to Jennifer Aniston at the time, was going through two stressful cycles affecting his Venus.  Venus is the planet that inspires affection and describes the way we relate to others and what we need in our relationships.  Transiting Saturn (disappointments, restriction) was opposing his natal Venus, which was putting pressure on his relationship and perhaps bestowing a sense of confinement.  At the same time his progressed Venus was opposing Pluto in his natal chart.  Pluto is the Great Transformer, and only the strongest of relationships will survive a cycle like this.  During any Venus/Pluto cycle we are likely to attract a relationship that hits us like a thunderbolt, and that appears to be what happened in this situation.

For the past six months Uranus, that planet of rebellion and change, has been challenging the Moon (emotions) and Venus (relating) in Brad’s chart, likely triggering resistance to confinement and commitment.  At the same time Angelina, who has Uranus in a challenging square to Venus in her own chart and requires a great deal of freedom herself, is undergoing multiple cycles of both Uranus (triggering a need for change) and Pluto (drastic transformation of everything in her life).  In addition, she is in the beginning stages of what I call the “midlife crisis transits” – several challenging planetary alignments (Pluto square Pluto, Neptune square Neptune and Uranus opposite Uranus) that cause us to rethink everything in our lives including the direction in which we are headed.

I could write for many pages about the astrological dynamics of these two – they have been a very interesting couple to study.  It’s sad for the seven children that the family is breaking up, but to this astrologer the breakup does not come as a surprise.