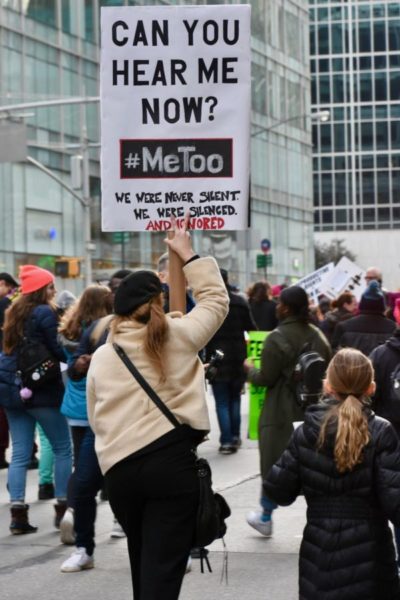 The phrase “Me Too” was first used back in 2006 by Tarana Burke to help spread the message that would help the young girls she worked with to heal from sexual violence.  But like so many things, the timing had to be ripe for that message to spread around the world, and that happened back in October 2017 with the Harvey Weinstein revelations and we can see the astrological correlations for that in the planetary movement of the planet Uranus – the radical revolutionary, the planet which tends to suddenly turn the established order on its ear.

The “Me Too” movement began in the United States, and while its message has spread around the world, its influence is predominantly American.  The first glimmer of the movement began back in June of 2017 when female workers in Silicon Valley began to express frustration with a “culture of harassment.”  At the time, Uranus was exactly conjunct Venus, planet of relationships and human interaction. This fast moving planetary dynamic would not have been sufficient to motivate a national movement in itself, but Venus in the US progressed chart was also affected which means that the archetype of the American woman was particularly affected by a need to change the established order (US Progressed Venus was at the exact same degree as the Uranus/Venus conjunction).

When all of this first came down I couldn’t help but think this sudden eruption of rage smelled just like the Black Moon Lilith (follow this link for other information about this fascinating planetary point).  The Black Moon Lilith embodies a primal feminine rage against the patriarchy that is very interesting in astrological charts where this point is prominent, and it happens to have been strongly affected by the Uranus/Venus conjunction described above (Uranus and Venus were both at 27 Aries as was the US Progressed Venus, and the US Black Moon Lilith is at 27 Leo).

The first hint of a growing swell of female empowerment actually occurred even earlier, back in January 2017 when the US Progressed Venus first made a harmonious trine to the US Black Moon Lilith.  This dynamic is symbolic of an emergence of a sisterhood and liberation of female repression as represented by the Woman’s March that month when over 2.6 million women around the world gathered together in protest.  The Harvey Weinstein story broke during the first week in October 2017, as transiting Uranus once again crossed the US Progressed Venus and the Black Moon Lilith in the US chart.

Uranus is not a kind and compassionate planet – traditionally ruled by Saturn (planet of pragmatism) Uranus inspires radical revolution where the end justifies the means and collateral damage is just a part of the greater goal.  As this cycle of Uranus wound down at the end of March and early April a backlash against the “Me Too” movement began to emerge, creating difficulties for women in their careers and making predators out of men whose behavior would at one time just have been considered juvenile. 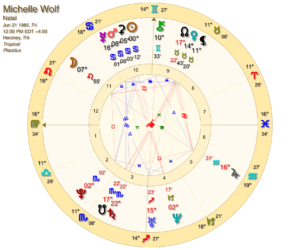 In the midst of this comes Michelle Wolf (6/21/1985), a comedian whose brand is that she is NOT a “nice lady” and who proved the truth of this branding at the recent White House Correspondents Dinner (and frankly, everywhere else where she performs).  It was not a big surprise to me to see the Black Moon Lilith playing a prominent role in her natal chart (in a close conjunction to her Venus and squared by both the Moon and Jupiter).   Wolf’s chart has a strong Plutonic flavor, with Pluto in a challenging square to her natal Moon in Leo (the performer).  While I am not a big fan of her work, it’s evident from these planetary dynamics that she is well suited as a spokesperson for the emerging feminine rage of the Black Moon Lilith.